Even though it's a bit early for them I've been keeping an eye out for Micropterix calthella on the Marsh Marigolds by the pond for the last week or two, just in case the sunny weather brought them out early.  The flowers are on the wane, but a solitary moth had appeared this morning even though it had to face a stiff breeze. 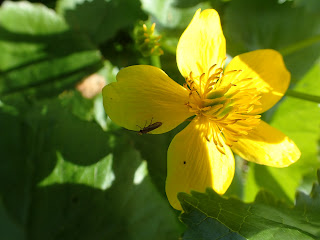 Am I alone in thinking that the Orange-tip butterfly is unusually abundant this year?  There seem to be several in my garden every time I'm out there - which is most of the time in this weather!
Posted by Chris Handoll