I thought that I'd done well last night until I read Sam's blog!  Still, we do our best, and 147 moths of 25 species is not a bad return for here at this time of year.  For the first time ever I put an MV trap at the front of the bungalow because the risk of startling passing motorists is minimal just now.

Unsurprisingly the most abundant species was Hebrew Character (34), good numbers of Common and Small Quakers and Water Carpet were also recorded.  First sightings of the year were Frosted Green, Purple Thorn, Lunar marbled Brown, Herald, and this Least Black Arches: 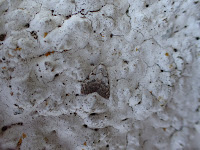 Since the course at FSC Margam which I was due to attend in July has been cancelled, I've decided to spend the money on a Robinson Moth Trap, which is now on order.  I shall be looking forward to setting it up in the front garden in the not-too-distant future.
Posted by Chris Handoll