For the first time this year, the MV trap was emplaced to accompany the mains actinic last night (Sat., 4/4), but the night remained too clear and cool and it was very much a standard array of moths in the two traps this morning. It was not a failure, but nothing exciting, though FFYs included early thorn, twin-spotted quakers, frosted green and an early knot-grass. 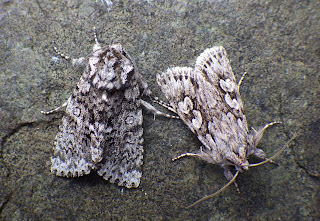 Above: the knot-grass with an early grey for comparison. 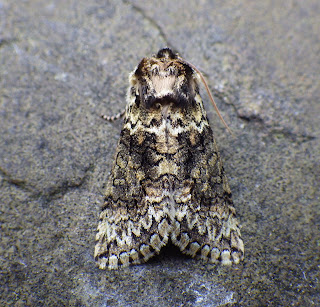 Above: frosted green, a woodland species whose caterpillars feed on oak.

The best sighting however was avian. As I was about to check the MV, the loud mobbing calls of crows could be heard and rapidly scanning the dawn sky, I spotted a female goshawk with two dive-bombing carrion crows in hot pursuit, with more noisy corvids in the background. What is more the goshawk (like a buzzard-sized sparrowhawk) was flying directly towards me and low overhead at <50ft. I was probably partially obscured to the hawk by shrubbery to one side and with partial overhead cover of a Sawara cypress (under which I have a garden seat onto which the trap is sometimes placed).
Posted by Ian Morgan