There have been many online reports of Phyllocnistis citrella mines being found in packs of Spanish clementines at Morrisons supermarkets during the last couple of months, as well as at Aldi stores before Christmas.
About a fortnight ago, I checked the packs available at the Morrisons store at Pemberton Park, Llanelli, looking through each in turn to check for leaf mines. I`m sure that anybody looking at me on a security camera would have judged my strange behaviour as rather suspicious!
On that occasion, seeing one pack with possible leaf mine damage I took it home and, after removing the packaging, examined the other leaves that were not easily viewed in the store. Alas, all the `marks` that were checked were not identifiable as P. citrella.
Today (Sunday 2/2/20) I had another attempt and, this time, I could see a leaf near the top of the package with possible leaf mine damage that may have been caused by the above micro-moth. It was not until later - after purchase - when I was able to open the package, that I found another leaf with clear, definite evidence of this species. 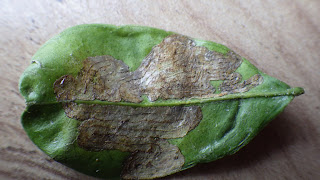 An `easy-pops` record, but nevertheless of interest and new to Carmarthenshire.
Posted by Ian Morgan