Forecasts of southerly winds originating in North Africa prompted me to trap over the last two nights (27 & 28/12), with two traps out in the garden.
The 27th brought me a solitary rusty-dot pearl (photo below) accompanied by two Epiphyas postvittana (in the MV trap); the `Atropos Flight Arrivals` page showed that a very small number of rusty-dot pearl sightings were also made elsewhere in south-west UK. A winter moth was later spotted resting on the wall.

Last night, a pristine grey shoulder-knot (photo below) and two mottled umbers were the only occupants of the two traps, with all found in the mains actinic trap; a third mottled umber was on the wall. The two traps are now safely stored away in the shed. 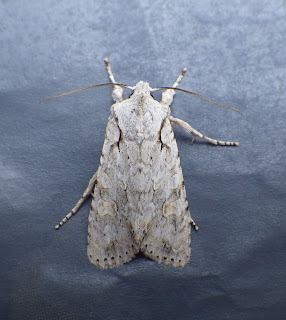 Remember to send off your 2019 records to Sam in January please.
On another matter, if you have n`t yet got the superb new Atlas of Britain and Ireland`s Larger Moths (Randle et al), then get it. It`s a first-rate book.
Posted by Ian Morgan