Yesterday, I had a rare day out away from my home patch of south-east Carmarthenshire when, together with Nigel Stringer, the Sawdde Valley (in the western Carmarthenshire part of the BBNP) was visited. I had long wanted to re-visit this site in autumn, due to the presence of small-leaved limes along the Sawdde gorge, the main purpose of the visit being to search for leaf miners on that tree species.
Both being engulfed in significant non-moth hassle and bad weather had delayed my visit, but yesterday `was on`. The desired mines on the few small-leaved limes that could be reached (the river in the gorge below was in full spate and dangerous) was, frankly, very disappointing. What I believe is either the sawfly Profenusia pygmaea or the moth Tischeria ekebladella was found on one oak tree. This species was also later noted at a second site, in the Amman Valley, alongside the access road to Garnant golf club. The remainder of the mines collected during the pleasant day were of common species. 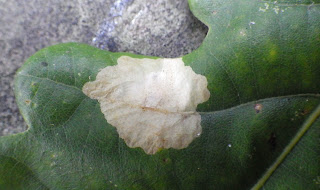 Above: the queried blotch mine. I`m of the opinion that it is Profenusia, but I`d prefer to be wrong on this one!

I also light trapped at home last night - a stupid choice as the night was mostly cold and clear. Expectedly perhaps, there were few moths in the single trap this morning - just six species, including two large ranunculus. 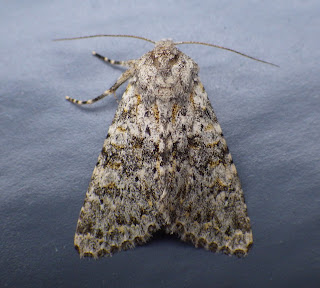 Two asides: driving southwards over Mynydd Du into the Amman Valley the sharpness of distant landscapes was amazing, with the distant vistas of SW England clearly evident - both the coast and hills of Devon and a view significantly along the length of the north Cornish coast. Obviously, I`ve seen part of the that coast before, but not with such clarity as was yesterday. Small wonder then, its precisely the same atmospheric conditions that plane-borne archaeologists use on their aerial surveying.
Finally, and another `aside`: the advantage of having a `smart meter` is that you can now calculate how much your trap takes to run - last night my 40w actinic used 13p`s worth of electricity from 8.00pm to 7.00am (ie just over 1p an hour). When I`ve got both the actinic AND the MV running it costs me c 3 p and hour. Useful info when you ask friends if you can leave your trap in their garden - or just for `Ebenezer Scrooge purposes`!
Posted by Ian Morgan