Autumn (and National Moth Night/s) beckon. Last night, I put out one garden trap with the forlorn hope of catching something of interest; it was under cover as heavy rain was forecast and it duly arrived. There was not too much in the trap this morning, but the moths included some moths that are typical of the early autumn period including the rosy rustic and centre-barred sallow shown below. 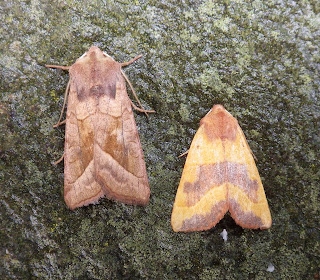 I`ve not trapped much recently, due to inclement weather, a busy workload and a week under some sort of cold/flu bug (though I`m certainly now `on the mend`). I have done some intermittent leaf-mining, with several useful records among the more common species - but no special rarities.

Anyway, it`s time to remind everyone that this year`s National Moth Night/s will be over the weekend 26th-28th September, with a main theme concerning the spectacular Clifden nonpareil. Normally I would say that this moth would be rather irrelevant to us here in SW Wales but - very recently - it has been recorded by moth`ers in Ceredigion and, better still, they were able to take some first-class photos. Really well done to our colleagues in vc46 - and it goes without saying that I`m jealous! Have a look at the Ceredigion moth blog link to see the photos.
Posted by Ian Morgan