I decided to re-trap last night (Saturday 21/9) after a poor showing on the previous night. The re-trap was prompted by the weather forecast showing warm air coming from France and elsewhere, but the downside was the heavy rain that was predicted (and the rain did come). However, I have found on past occasions that trapping during wet, warm thundery conditions can bring results and it was thus so last night.
Fortunately for me there was a dry interlude at c 6.45 am this morning and it allowed me to inspect the catch without getting wet.

The best moth was resting outside the trap and it was one that was instantly recognisable - Palpita vitrealis, so-named as its wings are see-through and glass-like; I`ve only trapped it once before (at Tyrwaun, Pwll). Chris Handoll also had one earlier this summer. 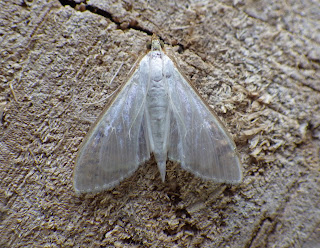 Above: last night`s Palpita vitrealis, photographed indoors due to the rain. Note the translucent  wings. 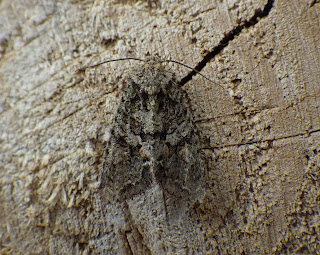 Above: this one puzzled me at first, but I think that it`s a brindled green (I`ll re-check it later). 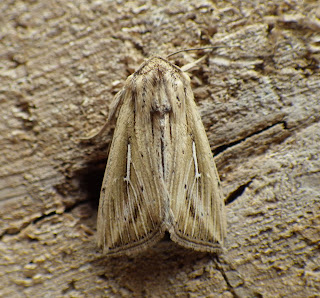 Above: this l-album wainscot also turned up.

Yesterday afternoon, I made a quick visit to some poplar plantings at Llanerch, Llanelli, the aim being to check if there were any Gypsonoma oppressana leaf-mines present. There were none, but I did find Phyllocnistis unipunctella (the 2nd Llanelli and 3rd Carms site).
Posted by Ian Morgan