Answer: when it's a wasp nest.  That's exactly what my Skinner-type MV trap was this morning.  I went to close it down at 5.15am and was met by the spectacle of dozens of wasps, almost all of them inside the trap.  The box was not buzzing with them though, they were mostly static, very docile.  Some of them were gathered in clusters under the lids, others were distributed in singles around the egg boxes.

I decided that there was nothing I could do but switch the light off, prop the lids open to let the wasps escape, and retire!  An hour later I returned; nothing had changed, they had not moved.  An individual wasp that had been crawling slowly around the lamp holder at 5.30am was still doing so at 6.30. 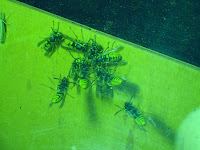 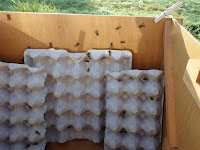 The trap was situated at the back of the property, which faces east.  The land slopes upwards so the sun is late to appear, and it was almost 7 o'clock when it began to shine on the moth trap.  At that point nothing had changed, but fearing that the warmth would cause frenzied activity I gingerly opened the trap,  moved the egg-boxes out and went inside for breakfast.  When most of the wasps had dispersed I examined the remaining moths - amazingly there were quite a few, so all was not lost, but obviously I'm going to review my future trapping strategy in order to avoid a recurrence of this very disturbing scenario.

Fortunately my large actinic trap, which was stationed at the front, did not seem to have attracted any wasps - they were all in their new nest at the front!  I have yet to examine the contents of the actinic, so a later blog might result.

The fact that I trapped at all last night was due to the arrival of numerous Painted Lady butterflies in the garden yesterday.  I reasoned that the conditions responsible for them might have brought along a few of their moth cousins, too.
Posted by Chris Handoll