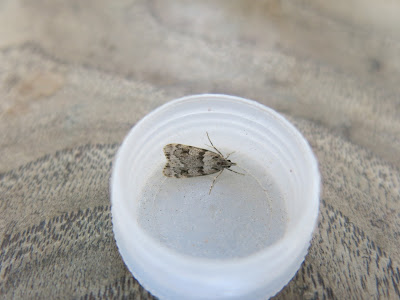 This is a female Scoparia ancipitella from bryophyte- and lichen-rich oak woodland by Nant y Clun on the NE side of Mynydd Mallaen, near Rhandirmwyn. It was almost the first scopariine I saw on the horribly wet morning of 30th July, so I potted it up for checking because ancipitella was in the back of my mind that day. I saw 100s of Eudonia over the next couple of days, but none showed the pale base and dark band that caught my eye on this one. Checking the genitalia today revealed the characteristic extra 'spiky bag' on the ductus, separating it from S. ambigualis (see annotated picture from Goater's Pyralid book) 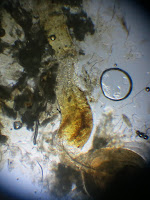 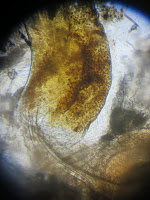 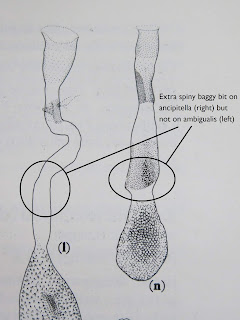 There is only one previous Carmarthenshire record of this mysterious moth: Dave Grundy caught 4 at Coed Tregyb near Llandeilo in June 2004. The books say it is predominantly north-western in Britain but that it may be overlooked because Scoparia ambigualis is so variable. The pale base contrasting with the dark central band is apparently a good pointer, but this isn't one to expect in most gardens (except perhaps mine at Cnwc, as we back on to lichen-rich woodland).
Posted by sambbryo