I had the two garden moth traps out last night (Fri 23/8) and it was an improved catch awaiting me this morning. Migrants were represented by a pearly underwing and a silver y (both singletons). The `old lady `referred to above refers to a moth of course, and not any opportunity for salacious gossip. Typically, this individual was not in the trap but rather resting on a garden bench onto which the trap had been positioned. 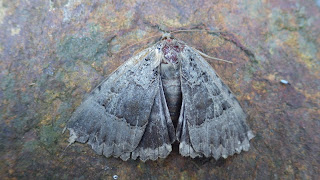 Above: this old lady looks as if it has been sleeping rough with its very dishevelled appearance but, as I note above, it did not enter the trap and was very placid when placed into a jam-jar for its overnight accommodation in the fridge (it was caught at c 11.00 pm).

Above: another scruffy female was this four-spotted footman, no males were present last night. 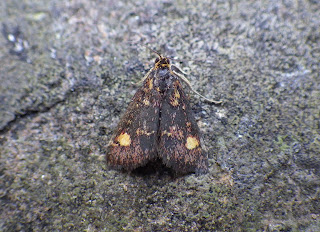 Above: sometimes the diurnal Pyrausta turn up at night-time traps. Pyrausta aurata is out and about around my marjoram at present.

I`m repeating the garden traps tonight, in the hope of catching some of the `goodies` that are turning up in Cornwall - convolvulus and death`s-head hawk moths, Palpita vitrealis etc. Good luck to all who trap...
Posted by Ian Morgan