I spent the morning leaf-mining around Ammanford today (20/8) ,with the deliberate purpose of increasing the number of leaf-mine records in SN61. I made a decent number of `bread-and-butter` records (ie common species), so it was a worthwhile effort.
One of the sites visited was Betws Park, not far from the centre of Ammanford and adjacent to the River Aman. Trees such as lime, London plane and poplar all failed to produce `good` records of dependent leaf-miners, but Ectoedemia septembrella on planted Hypericum was pleasing to note. 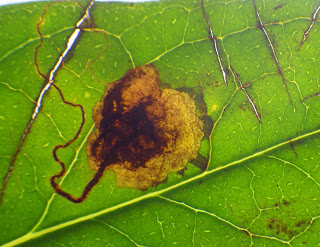 Probably one of the commonest leaf-miners encountered in the county is Lyonetia clerkella, which uses a wide range of host tree leaves. Today, it was on a slightly unusual host - Himalayan tree cotoneaster Cotoneaster frigidus. 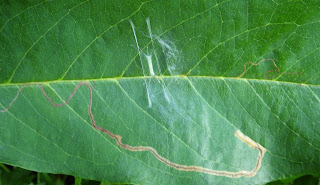 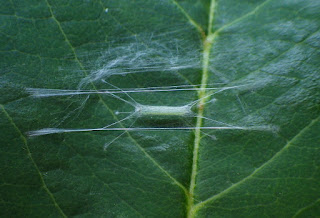 Above: the top photo shows the leaf-mine of Lyonetia clerkella, with the silky cocoon in which pupation takes place above it. The lower photo shows that same cocoon and, if you click on the pic to enlarge it, you can actually discern the larva in the earliest stages of the pupation process.
Posted by Ian Morgan