I`m still dealing with various moth backlogs (leaf-mines, ermine moths and other `odds-and-sods`) as well as trying to write up some botanical survey/other work at WWT Penclacwydd and Machynys.
Furthermore, I`ve trapped (at home) for the last two nights and also intend to do so tonight (Saturday) as the winds are warm and southerly. Consequently, this `catch-up` blog is quite a bit of a mix...

I`ll omit my minor daytime mothing results at WWT and Machynys as only common species were seen but, a couple of days later, I visited the marvellous and easy-to-access brownfield site (ex-colliery) at Cynheidre, north of Llanelli. The flower-rich areas are rich for lepidoptera and painted ladies were much in evidence when I visited on 31/7. However, at that time I thought that their presence was simply due to `good habitat` - it was only the next day when I saw large numbers in my garden and elsewhere that I realised that there either had been an influx or the en masse emergence of progeny from an earlier immigration. I can honestly say that I`ve never seen such bumper large numbers - and I`m certainly not a spring chicken anymore!
At Cynheidre, whereas the day-flying butterflies were much in evidence, few adult moths were to be seen or found (except some grass moths and several Pyrausta despicata), so I focused on leaf-mines instead. 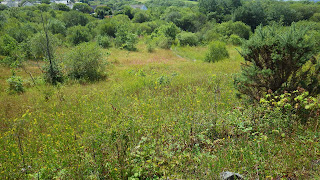 Above: an example of well-structured and diverse vegetation at Cynheidre.

Another visit to another top-notch brownfield area at Yspitty, Bynea east of Llanelli was of interest, but mostly in terms of the plants found. However, leaf-mines of Mompha raschkiella were noticeable on rosebay willowherb. 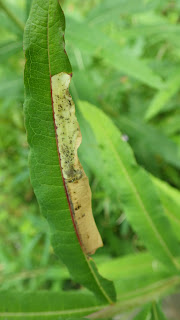 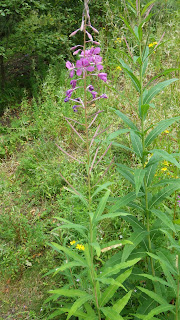 Above: an easy to spot leaf-mine - Mompha raschkiella on rosebay willowherb. 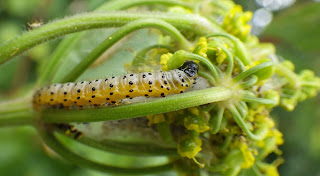 A noteworthy leaf-mine record was made much closer to home - in my garden, in fact. I`d been having a break from my `nat. hist. backlog` by dealing with another backlog - the garden and weeding among the young apple trees I noticed an unfamiliar leaf-mine. Virtually every leaf had the ubiquitous Lynoteia clerkella mines but this one was different and it proved to be Stigmella incognitella. Photo below: 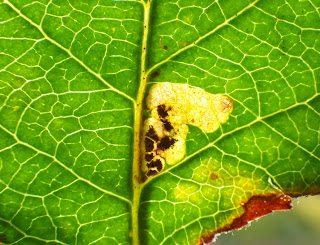