This afternoon, I spent a couple of hours in the Pembrey area. I visited the access road down to Pembrey Burrows & Saltings LNR (but did not venture further as the sun had brought too many people for my liking), as well as some sites in Pembrey village itself, namely Pembrey Church and the canal footpath. A good tally of leaf-mine records were made.
One reason why I visited the churchyard was to inspect the elms on the southern boundary, particularly to look for Stigmella ulmivora, which I eventually found after much searching. The first county record of this micro was a light-trapped adult, caught by Huw John from the (very) nearby Pembrey Post Office, thus preceding my 2nd record (from Llandyry Churchyard) of a few weeks back.
While searching for ulmivora, something rather larger was found under one of the elm leaves - a hawk-moth caterpillar which I believe is of a lime hawk-moth. 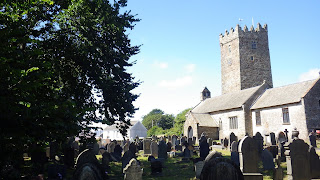 Above: the ancient church at Pembrey, with the row of elms to the left.

I`ll add just one other photo, that of Acrolepia autumnitella on Solanum dulcamara (bittersweet), spotted by the old Pembrey Canal.

This moth causes large, translucent blotches and I`ve opened one to show the larva.
Posted by Ian Morgan