I managed to trap on a few nights, before the weather became unsuitable, using actinic lights, no MV since the wasp infestation.  I think that the wasp problem has now been sorted, so the MV trap will go out as soon as the weather cheers up.

Meanwhile, an unfamiliar caterpillar turned up outside my greenhouse last week: 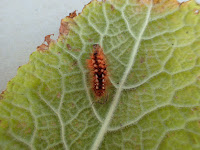 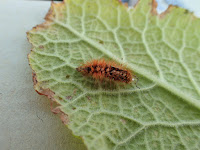 Unfortunately it was dead on arrival, and a bit mutilated (head partly detached), but bore bright orange hairs, with raised tufts at the anterior end.  About 15mm long.  Any suggestions as to identity would be welcome.

Other notable arrivals included what I assume to be a dark form of Pinion-streaked Snout.  It seems to be the right size and shape, but lacks any of the usual wing markings: 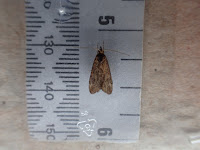 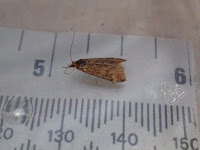 The last trapping session, on Wednesday night, yielded about 200 moths, almost half of which were LYUs.  Possible immigrant species were Silver Y, Diamond-back, Rusty-dot Pearl, and Rush Veneer, nothing more exciting than that.  Notable others included Small Argent and Sable and Yellow-barred Brindle: 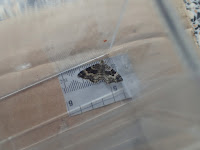 Last but not least, a tortricid which I believe to be Apotomis semifasciana, aka Short-barred Marble - a very appropriate name: