I`ve just popped out to get some raspberries and spotted what looked like the activities of the attractive micro Callisto denticolella on my adjacent apple trees. I`d recorded this species as a mine (and as an adult) at my previous garden at Pwll and indeed the then still small apple trees that are now at my new garden were `grown on` for a season there, perhaps allowing colonisation before they were transplanted.
The apple trees today also had abundant Lyonetia clerkella and quite a few Stigmella incognitella leaf-mines; the raspberries had their own mines in the form of the common Stigmella aurella (more often seen on brambles). 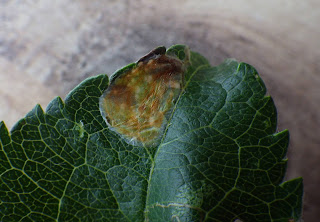 Above: note that the upper surface blotch has quite a distinctive orange colour and, below: after vacating the blotch mine the Callisto larva then resides in a downwards fold in the leaf edge.