All manner of beasties but no rare migrants...

I gave trapping a third `shot` last night (Saturday 24/8) as conditions seemed ideal - really warm with SE winds, so perhaps I was justified in hoping for something out of the ordinary this morning, but it was not to be. My only migrants were a solitary silver y (a different, larger individual to the previous night) and a trio of rusty-dot pearls. The dominants in the two garden traps were LYUs (- say no more!), water boatmen, and scores of small brown beetles though, to be fair, there were about 30 spp. of moth. Since the traps are still out, and my brain is re-set for early starts, I`ll probably give it a last go tonight but I`m not too optimistic (I`d love to be wrong!). Postscript: Monday 26/8 - last night`s catch was rubbish! Traps now away and back to some leaf-mining. 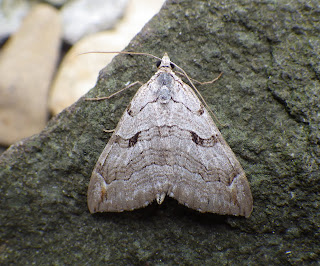 Above: suggesting some local movement was this treble-bar, which feeds on St John`s-worts in open brownfield habitats in the Llanelli area. 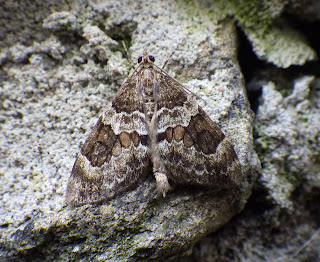 Above: The first of the season`s spruce carpets.
Posted by Ian Morgan