Again, last night (24/7) there were no migrants in my garden traps and, more generally, there were (mostly) lesser numbers of moths in the traps, the main exceptions being substantially more four-spotted footmen (4 females and 2 males) and large yellow underwings, which dominated the roof-top actinic in aggressively restless numbers (45+).
I`ll re-trap tonight, as the winds are decidedly southerly but, as they become westerly tomorrow, I`ll make it the last night of a four night trapping stint. So `fingers crossed` for tonight, but I`m not too optimistic. Just a couple of photos today: 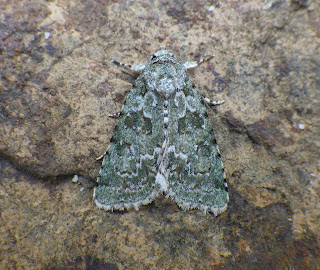 Above: a marbled green to compare with the photo of the previous night`s marbled beauty. 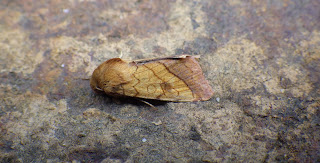 Above: a FFY bordered sallow.

PS. At about 9.00 am a male brimstone butterfly flew through the garden, perhaps having an `early start` due to the high temperatures.
Posted by Ian Morgan