No Leopards, only Tigers

The first Garden Tiger Moths, two of them, appeared in my traps on Monday night.  It was a very busy night for moths, too busy in fact, because the numbers in the two traps yesterday morning were far greater than I could comfortably manage.  I rapidly came to the decision that counting the Garden Grass Veneers, Heart & Darts, Yellow Underwings, Dark Arches and Uncertain/Rustics in particular was out of the question in the time available, so my records of these and a few other less numerous species can be described as 'cautious guestimates'.  In the end, the record sheet shows a total of over 400 moths, but in reality the number was greater than that.

Garden Tigers apart, the 90+ species did not include any macros of great interest, although Ghost Moth and Four-dotted Footman were good to see:

However, there was one arrival that I didn't recognise, and it would be very nice if someone could put a name to it: 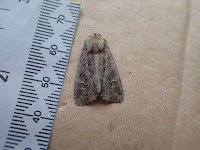 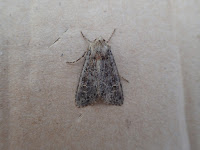 My first thoughts were Confused or Dusky Brocade, but I could be well off the mark, I'm not familiar with either species.

Micros were more interesting, though.  There was a very pretty Argyresthia brockeella, and a rather less colourful grey moth that I think might be Anarsia spartiella: 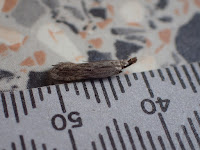 Finally, a tiny moth that I think is either Tischeria ekebladella or Coptotriche marginea - Ian , what do you think?  I believe that you had marginea a little while ago. 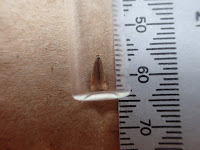 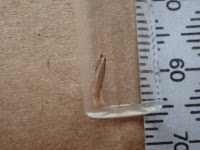