More wanderers (or home from home)...

The forecast looked decent for trapping last night (Friday, 12/7) - cloudy and overcast all night - even though the light wind was northerly, so out went the two garden traps. The variety and interest in the traps this morning justified the effort though I`m sure we all long, at this time of year, for later sunrises.
Only yesterday, I was thinking which of the regulars I used to catch at Pwll that I would be unlikely to get at my new trap site and various wetland moths were among those that came to mind.
It was a surprise therefore, to have three marsh habitat species in my trap this morning, the common ringed and brown china-marks and, more interestingly Calomotropha paludella of which two individuals were present; hence the `home from home` in my title. As the vast bulk of local wetland habitats are SW, S or SE of my current garden and the winds were northerly, it made me think of possible local sources for these moths and options include the Gwendraeth Fawr valley or, nearer still, wetland areas on the former Cynheidre Colliery site. 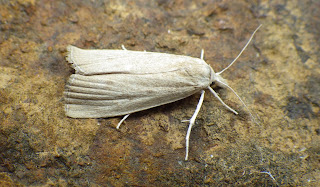 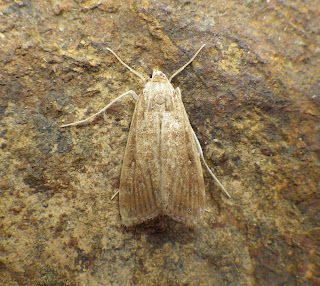 Above: two of the wetland moths that made an appearance - Calomotropha paludella female (top) and ringed china-mark (bottom).

A true lover`s-knot presumably came from a local rhos pasture site, of which a few still survive north of Llanelli. 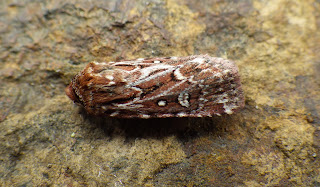 Above: true lover`s-knot, a moth of acidic pastures etc.

Scarce silver lines and four-spotted footman are likely to be local woodland species (photos below): 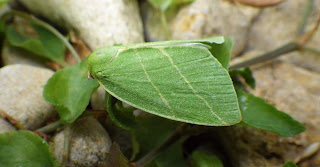 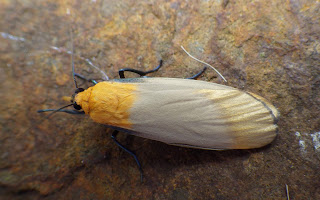 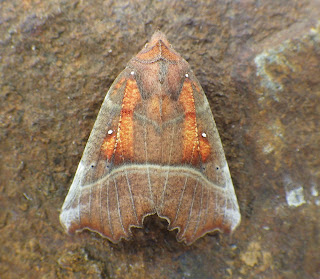 Above: not rare but always a favourite of mine, the herald moth. It reminds me of finding it hibernating during reckless explorations of dangerous coal mine adits during my youth.
Posted by Ian Morgan