It was perfect moth trapping weather last night (Tues 23/7) - hot, humid and with episodes of thundery showers so, consequently, a decent number of a wide cast of moths were in the two traps this morning. Given the threat of torrential rain, both traps had the advantage of my home-made rain shelters (which worked perfectly), but the mains actinic was not placed at its usual prominent flat-roof top position as rain causes `surface pooling`, drowning many moths or rendering them unidentifiable. Instead, it was placed on the lawn at ground level. The MV was also at ground level but on another lawn some distance away.
I`d been hoping for migrants, but there were none - not even a silver y (which were present in the previous night`s trap). There was a good range of resident moths - for example, four-spotted footmen, yellow-tails galore, eyed hawk-moth etc, in all some 65+ spp.
Three Dioryctia abietella and what seems to be a Zeiraphera insertana were caught, but the latter has to be re-checked. Comparing photos earlier this morning, I`d thought that it might have been Z. griseana (a larch-feeder), but I`ve since concluded that not to be so.
As the traps are out, they`ll be left there for tonight, with the actinic ascending back to the flat-roof, hopefully to entice passing migrants!
"If you don`t at first succeed....." 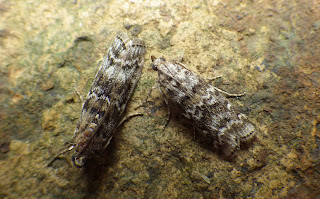 Above: two of the Dioryctia abietella. At my previous Pwll garden, I also used to occasionally catch the larger and more colourful Dioryctia sylvestrella. 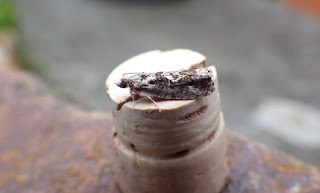 Above: possible Zeiraphera - to be re-checked later.
Posted by Ian Morgan