I re-visited a superb area of dry brownfield grassland near Loughor Bridge at Bynea, Llanelli. This former metalliferous works site has modern manufacturing units and a chemical works at its front but, behind, an extensive area of high quality brownfield and saltmarsh transition survives. 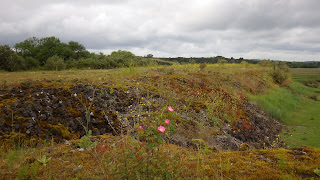 At last - for 2019 - I saw a hummingbird hawk-moth. It was resting in a hollow comprising big blocks of copper slag, no doubt warming up on the black boulders. However, perhaps `resting` is an inappropriate word as it was constantly taking off and landing. In other words, it was perhaps better described as restless! I tried to take a photo, but it was a hopeless task. Eight painted lady butterflies were a supporting migrant act. Marbled white butterflies were also out in force.
A surprise find was a banded demoiselle Calopteryx splendens, resting in bushes next to an area of estuarine mud; I can only presume that it was a wanderer from the freshwater section of the Afon Llwchwr some miles upstream.
Several Pyrausta despicata were spotted and I managed to take a photo of one after much stalking. It`s a `dry-ground` species that feeds (as a caterpillar) on plantains. Photo below: 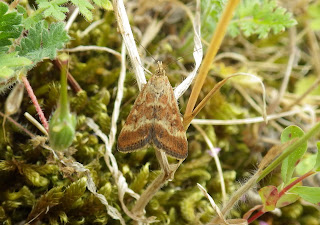 Finally, the following two photos show why the mullein moth is not loved by Verbascum growers; both plants were only feet apart. One was `well-chewed` by mullein caterpillars, the other untouched. I have also seen mullein moth caterpillars on Buddleia leaves and on Scrophularia (figwort). 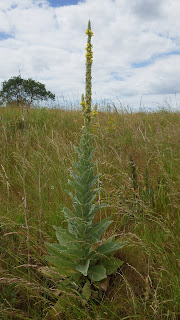 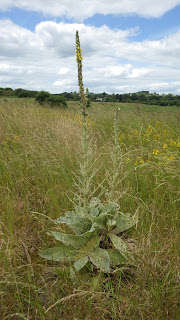