I had intended this morning to access the saltmarshes between WWT Penclacwydd and Machynys to see what I could find, thinking that I`d also make a quick prior visit to the brownfield habitat behind some industrial premises at the easternmost end of Bynea, at the very south-eastern edge of Carmarthenshire.
Along the informal path that literally skirts the edge of the estuary at Bynea a lot of amenity planting of trees has been undertaken in the past and  having noticed field maples here previously, I made a mental note (which I duly forgot!) to re-visit in the early autumn. Seeing the field maples there today - and thus remembering about their presence!- I started searching for E. louisella leaf-mines but, after about half-a-dozen trees, gave up. Later, I stopped by another tree and there it was...

Above: leaf-mine on a field maple key. You can seen where the egg was laid at the far left of the mine. 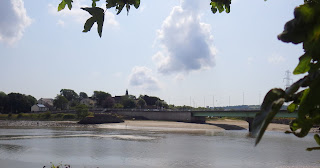 Above: Loughor Bridge linking Carmarthenshire and Glamorgan. I was tempted to have a furtive `lurk around` in vc41 but if Barry Stewart, the local Marcher lord, caught me it would mean a long spell in the Glamorgan gulag. The leaves framing this photo are those of the very field maple on which I found louisella.

I also found Caloptilia semifasciata on other field maple leaves. Photo below:

Moving on along the estuary-edge track, I reached the brownfield site, looking parched after the recent dry weather. 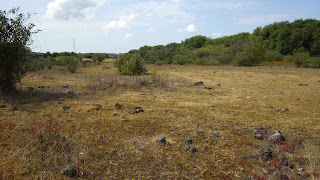 Above: the `Bynea Serengeti`, a mix of dry grassland and birch/willow scrub. 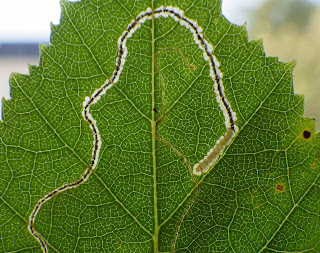 Above: In the scrubby area was the ubiquitous Lyonetia clerkella on birch; note the really well-segmented larva to the right. 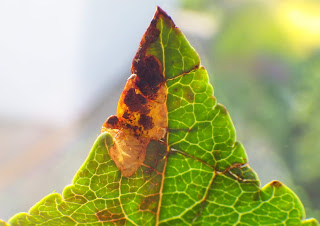 Above: on apple, also in the scrub area,  this may be Bohemannia pulverosella; the dark bits are frass. 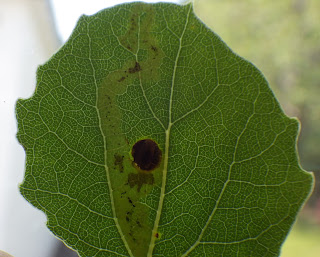 Above: as with the last one, I`m uncertain about this mine - note the distinctive round blotch as well as the broad mine to its left. Suggestions welcome, either on the blog or via email.

Within the willow/birch scrub area, I checked for lunar hornet clearwings, which are known locally in the Bynea-Llwynhendy area, but had no luck. However, when searching the bases of the old willows I became aware of small moths being flushed off the trunks, flying briefly before settling nearby on the same tree. 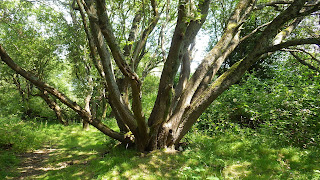 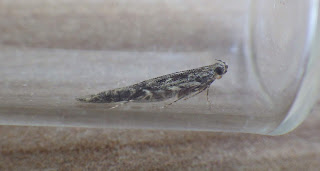 Above: the old willows and one of the `small moths` - Batrachedra praeangusta.

Finally, due to the heat and spending more time than anticipated at Bynea, I decided to leave the sunny saltmarshes for a cooler day (or better still, a warm evening) and instead opted for a short inspection of a nearby locality - Morfa Berwig LNR.
Briefly, the highlight here were a couple of adult and large metallic-shining Coleophora trifolii, noted atop tall/ribbed melilot patches. I netted one twice, but both times it escaped.
Posted by Ian Morgan