The forecast was heavy rain last night (Met Office) or light rain (BBC). Planning for the former I put out just one trap (MV), under the purpose-built shelter that I had made late last summer; however, it seems that the BBC forecast turned out to be the more accurate one. I did not put my mains actinic on its usual flat-roof site as rain would result in scores of wet, descaled moths on the flat-roof, many to be drowned and others `ready food` for birds. So, it was just the one MV trap.

There was a fair mix of moths awaiting me, including a couple of FFYs, but nothing particularly exciting though Hypsopygia glaucinalis added another record of this increasing pyralid. 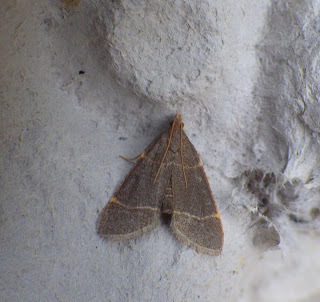 Above: an in situ `record shot` of the Hypsopygia. 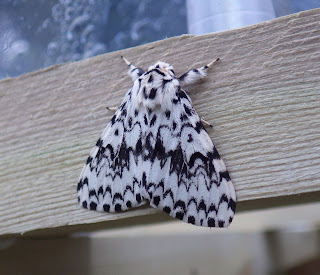 Above: one of the FFYs, a black arches, resting on the trap shelter frame.
Posted by Ian Morgan