Still interest in the traps...

Last night (27/6) I trapped in the garden for the third night running and was interesting to note the turnover of moths, with different species, including some of interest, appearing on all three nights; I`ll be re-trapping tonight as my body-clock has adjusted to the dawn starts or, in other words, I`d wake up anyway, even if I was n`t trapping, so I`d might as well!

Probably the best catch last night was Epermenia aequidentellus, a second county record, the first being made a few years back, caught by Melanie near Llansteffan; wild carrot (frequent on dry coastal soils) is the likely food-plant in Carmarthenshire. Its photo is below: 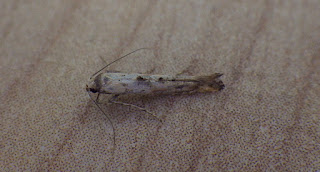 There were plenty of micro-moth species in the sheltered MV trap (under trees and sheltered by shrubs etc) and they included, for example, the pine-feeding Exotelia dodecella, the little golden Coptotriche marginea (easier to record via its distinctive bramble leaf mines) and more Argyresthia  pruniella. 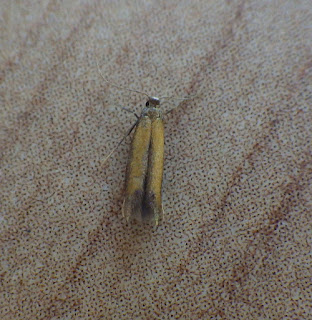 Above: Coptotriche marginea.
Several macros had their FFY records during this warm week, including dun-bar and pale-shouldered brocade but the best macros were shark (in the roof-top actinic)and clay triple-lines (in the MV trap). 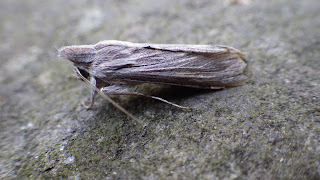 Above: shark with the `fin` above its head. 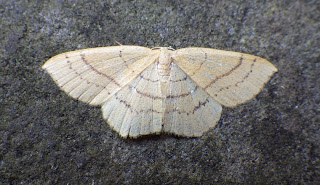 Above: clay triple-lines. The hot night-time weather is probably encouraging dispersal, as I know that the nearest beech trees are some distance away in the adjacent woodland. In practice, such wanderings may result in new moths for your home trap site. 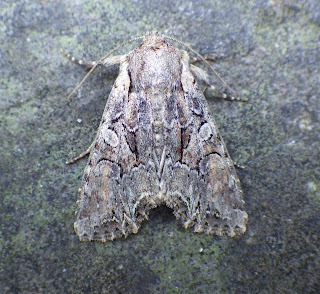 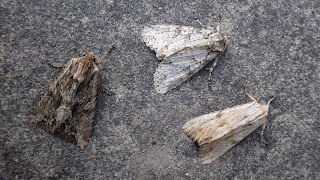 Above: not `The Archers` but the arches, all common/frequent species - dark, grey and light arches.
Posted by Ian Morgan