Rain and even more rain...

The inclement weather has stopped trapping activities and severely curtailed any daytime mothing. There was a short respite yesterday afternoon (12/6), when I undertook an unsuccessful search of some Azaleas in a local woodland garden for any evidence of Caloptilia azaleela.
I also briefly visited a nearby scrubbed-over rhos pasture site, mainly to look at birch leaf-mines. At the latter site there was what seems to be Stigmella lapponica and also spinnings of Anania crocealis in the terminal shoots of fleabane Pulicaria dysentrica, a frequent grey-leaved plant of damp habitats. 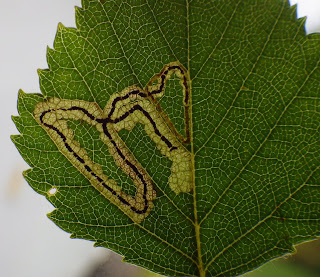 Above: the presumed Stigmella lapponica. 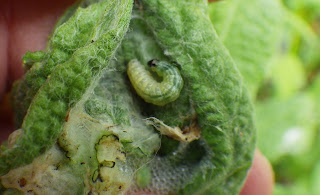 Above: caterpillar of the crambid Anania crocealis. Look out for seemingly swollen terminal shoots (which are actually the leaves spun together) and open carefully to reveal the caterpillar. The above photo is a bit out-of-focus but it shows the colour etc of the caterpillar.

Postscript: I`ve just checked a Glyphipterix that I caught on Carex pendula within Stradey Woods and it`s G. forsterella, with a silver dot in the black apical spot on the wing. I would not have been surprised to catch forsterella at (eg) WWT Penclacwydd or at Ffrwd Fen, as I had the (perhaps wrong) impression that it was solely a wetland species rather than occurring in woodland. The only other sedge present was a small amount of C. remota.
Posted by Ian Morgan