Readers may recall a couple of postings in 2017 and 2018 concerning my collection of larvae that were suspected to be Pexicopia malvella (`hollyhock seed moth`) from Malva at Burry Port harbour (2017) and from Althaea at Llangennech (2018).
Steve Palmer, the co-ordinator of the Gelichiid recording scheme has bred adults from the Llangennech larvae and these were indeed Pexicopia, thus absolutely confirming its presence in Carmarthenshire. It was also previously known from the north Gower saltmarshes in Glamorgan.
Thanks to Steve for all his much-appreciated efforts. 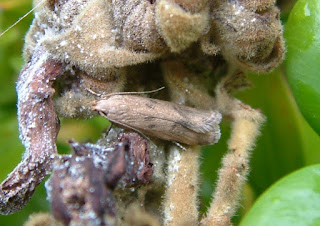