I recently (18/6) visited a couple of sites in the Kidwelly area - Glan yr Afon LNR and Kidwelly Quay, both sites being on the western edge of the town but separated by the Gwendraeth Fach river as it becomes estuarine.
Glan yr Afon has a nice array of rank natural vegetation of both a dry and wet character though, sadly, it has consequently lost most of any early successional habitats; it is easy to visit (as is Kidwelly Quay), having ample adjacent parking.
Epermenia chaerophyllella leaf damage and caterpillars were found for the second time on - as is usual - on hogweed leaves. Since finding it recently near Bynea, I have been `on the look-out` but it is certainly not common locally; indeed one site that I examined recently had none on extensive areas of hogweed and, at Glan yr Afon, I only found it one one plant. More easily located at that site were the caterpillars of Anania crocealis within spinnings at the tips of fleabane and a fresh adult moth was also noted. A blackneck adult was spotted nearby, but it was too skittish for photography purposes; plenty of its larval food-plant (wild parsnip) grows hereabouts. 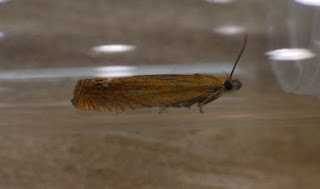 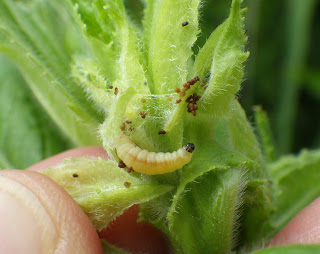 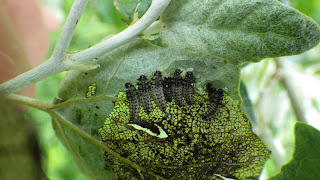 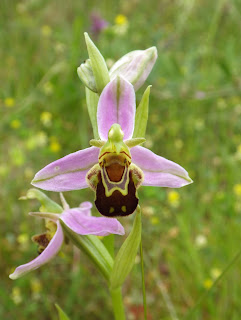 Above: moth-wise irrelevant, but nice to find - a bee orchid (struggling to survive in the rank vegetation).

I then moved on to Kidwelly Quay, where two interesting micros were caught. The first was Bucculatrix maritima, found resting on the wall of the quay about 3 ft above the saltmarsh below, the other being Chrysoethia sexguttella, netted on a honeysuckle above a stand of its Atriplex/Chenopodium food-plants. The honeysuckle is a bit of a mystery as it is a non-native species with twinned flowers and, furthermore, it provided a second moth-related mystery in that it had a Coleophora on its surface. There is a rare Coleophora that utilises honeysuckle (among other species) but the Kidwelly one does not look like it - perhaps it is just the common C. serratella. 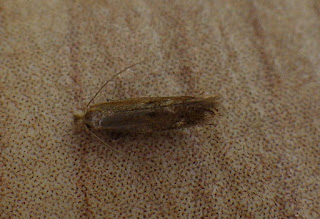 Above: the tiny (< 5mm) Bucculatrix maritima. 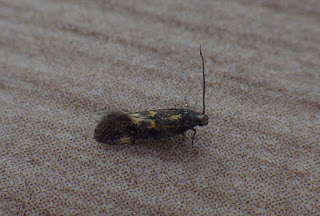 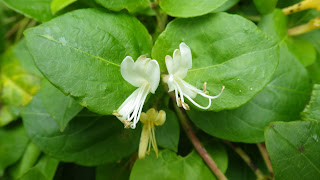 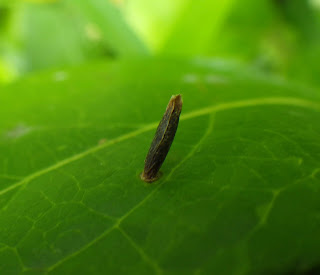 Above: (two pics): the mystery honeysuckle and its mystery Coleophora. 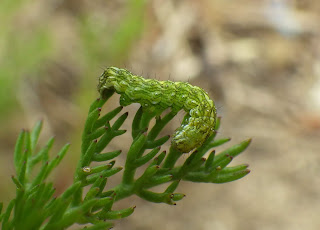 Above: caterpillar of chamomile shark. Most were still very small with only one larger individual seen. 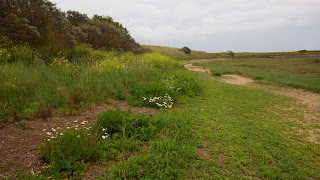 Above: chamomile shark habitat at Pembrey: note the mayweed plants, some of which are in flower.
Posted by Ian Morgan