Following Chris Manley`s very recent posting of a scarlet tiger, I too have been recording `big cat` moths with a feline-themed name - the leopard moth. Two were in my garden actinic last night (22/6), no doubt one of the dividends of being located adjacent to mature mixed woodland; at Pwll I`d only recorded it (as a singleton) on one occasion. 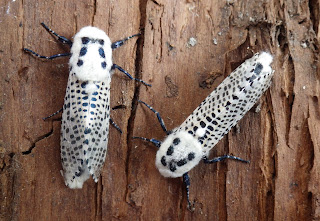 Above: last night`s leopard moths. The thorax looks as if its made of cotton wool - left-click on pic to enlarge.

A moth that was a regular at my Pwll garden traps was the southern wainscot and it provided my wainscot contribution for last night; it is perhaps most frequently recorded as a coastal species in Carmarthenshire. The front of the thorax immediately behind its head has two bands, thereby helping identification. 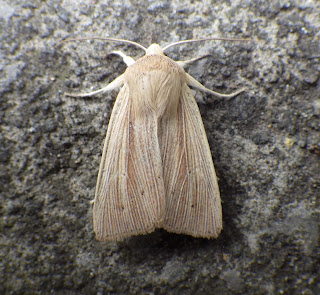 Above: southern wainscot; note the `banding` in the 2nd photo.

Another moth that was fairly regular at Pwll was the waved carpet and it was encouraging to note that they too are at my new wood-edge garden trap site; a photo of last night`s individual is shown immediately below: 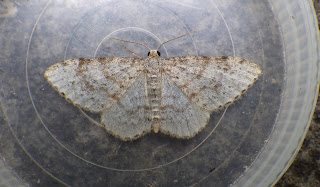 Two species that could be considered `suburbanites`, as their food-plants (cypress and privet) are often grown in gardens, are cypress carpet and Clepsis consimilana, they were among the 42 species noted from my two traps (one actinic, the other MV) last night. 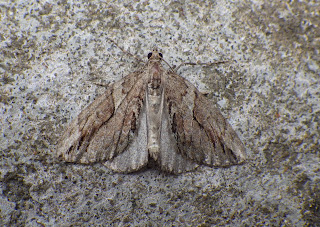 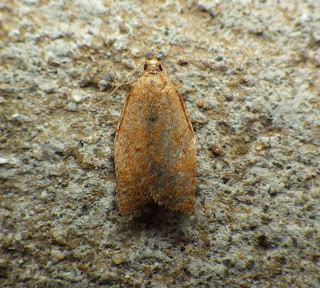 In all, it was a worthwhile night to trap and I am glad that others also had success.
Posted by Ian Morgan