Last week, when I visited a bog site near Pontyberem in rather adverse weather, I spotted in a particularly wet section with Typha etc, one of the Anasimyia hoverflies, which I duly collected and, at almost the same time, flushed what I initially and casually thought was one of the grass moths with a lot of white on its wings. Both were potted up with some rapidity as rain was starting to fall, though it did not actually develop into a proper shower. Upon getting home these `tubed up` specimens were put into the fridge for further perusal but were then forgotten about, and they then became concealed behind various food items. Over the weekend I remembered about their existence and took photos of both before releasing them in my garden, after feeling some guilt about their neglect and imprisonment (both energetically flew away with ease).
The pyralid has confused me and I include its photo herewith. It was quite small, like one of the larger grass moths and it did not arouse any particular interest until after I had released it.: 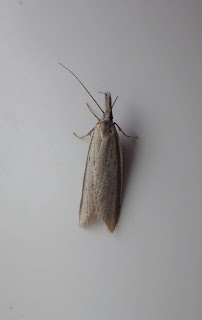 Is it possibly a small pale  Donacaula forficaulis or am I `barking up the wrong tree`?

Late last week (31/5) I revisited a small raised bog close to Pont Abraham near Hendy, making a few records of common species and also sighting a male brimstone butterfly among the alder buckthorns. A leaf mine on one of the birches was of some interest as I believe that it is Eriocrania salopiella, which I`ve had just once before this year (at Stradey Woods, Llanelli), in a year when I`ve been looking a lot at birch mines. 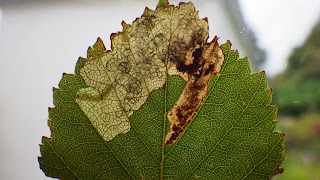 Above: the leaf-mine, with the start of the mine being on the leaf vein margin in the far upper right (left click on pic to enlarge). Above: the larva, note the two swollen segments each side of the head.

I`ve not light-trapped much recently but, encouraged by the success of others and the apparently ideal conditions on Saturday night (1/6), out went my two garden traps, one MV and the other a mains actinic. Unlike Sam`s recent 100+ species scores at Cnwc, my result was disappointing, with less than 40 species - I would have expected 60+ at this time of year at Tyrwaun, Pwll.
I may have missed perhaps <3 micro species in the semi darkness when I emptied the traps around dawn, to avoid the incoming rain, but still the totals were not impressive. I was consoled though by the continued presence of privet hawk-moths at my new garden site and also five figure of 80s, a species that I thought that might have been lost when I removed a mature aspen and its aggressive suckering progeny a couple of years ago. Presumably they are instead coming from large poplars that are visible in nearby woodland. However, the numbers of micros were improved from my recent traps, albeit with mostly common species, though Ptychloma lecheana was nice and Epinotia bilunana and Argyresthia retinella perhaps were both a consequence of placing one trap directly below a mature birch tree. 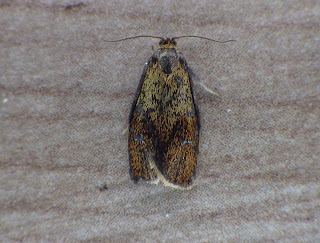 Today (3/6) I walked to the Penrhyngwyn shingle spit at Machynys, Llanelli, but it was very disappointing moth-wise (both for leaf-mines and adult moths). It was far too blustery, which kept the moths under cover - I must instead return to dusk here on a calm, warm night. Two painted ladies were seen and a voracious aggregation of mullein moths on their namesake host plant were of vague interest.

Above: mulleins on mullein (left-click pick to enlarge).

As the moths were sparse, I`ll finish this blog with something vegetative - yellow-horned poppies on the Penrhyngwyn shingle spit, where a couple of score were estimated.

Above: looking across the Burry Inlet to NE Gower
Posted by Ian Morgan