I paid a short visit to the coast at Llangennech yesterday (19/6), which was n`t particularly successful as I could n`t reach my target area of brownfield at the old Morlais Colliery site, being stopped by a combination of high wire fencing, broad ditches and head-high brambles as well as a railway security camera! I`ll get there somehow - I have a plan...
Anyway in the areas that I did visit, I did find more Mompha epilobiella spinnings on greater willowherb and also Anania crocealis spinnings on fleabane; both near the Afon Morlais. I also checked the fleabane plants for the leaf damage and caterpillars of Oidaematophus lithodactyla that I found recently near Bynea but, this time, the only leaf damage was that caused by the leaf beetle Cassida murraea. Incidentally, when I was searching clumps of Centaurea nigra for Coleophora a few weeks ago, I`d find holes made by the related Cassida vibex. 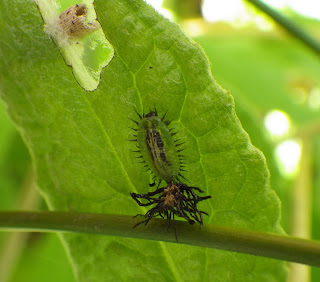 At another nearby site (still at Llangennech), I checked the sea mayweed for chamomile shark caterpillars, which I`ve had close-by in the past, but none were seen. However, other caterpillars that seemingly are not of chamomile shark were found - first photo below. 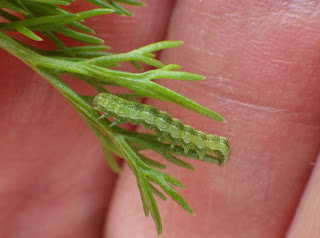 I tried an online search for caterpillars on Tripleurospermum and the useful Northumberland Moths web-page suggestions included bordered straw, which was superficially similar. Unfortunately closer inspection showed some differences and, in any case, we have n`t had a migrant spring to provide the adults to lay eggs, so that moth option seems extremely unlikely.

The same online search also yielded another relevant posting - which turned out to be one of mine dated 21.7.15 on the Carms moth blog! Evidently, I `ve been perplexed by this caterpillar before. The second photo above is obviously of a more advanced caterpillar taken in late July (at the Morfa de-tinning works site, Llanelli) but, back in 2015, there were no suggestions as to its identity. Perhaps it is a generalist polyphagous species in terms of its caterpillars` menu?
Any proposals regarding its identity will be appreciated - thanks.
Posted by Ian Morgan