It occurred to me that though I lurk around distant hills and woods looking for micros and leaf-mines,  I had neglected such antics in my own garden. Yesterday evening (20/6), I had a pleasant ten minutes doing so. Several Argyresthia, flitting around a mature box hedge immediately below a flowering cherry (the ubiquitous `Kanzan` - not my choice!), were noted and one duly potted up. Today I had a look at it and it proved to be the `cherry fruit moth` Argyresthia pruniella, which actually feeds within cherry shoots as well as the fruit - indeed `Kanzan` does not bear fruit. Sam`s 2016 list only gives four Carms records for this species, though I seem to recall that I also had it at my previous garden at Pwll . 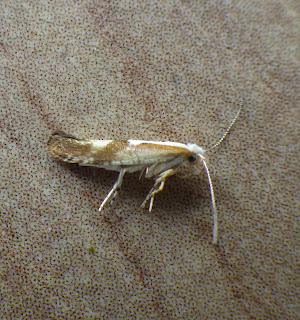 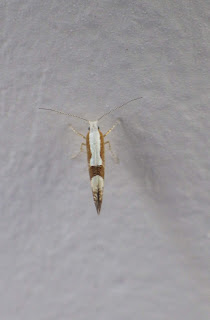 Above: A. pruniella, from the side and from above. In the first picture, the moth is just `out of the cooler` - it recovered seconds afterwards and it was duly released below its cherry tree home. Note that the cross-band on the wing reaches the costa (front edge). 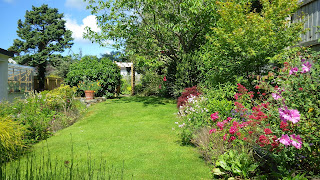 Above: the cherry tree is to the mid-right, with the box hedge below. You may be able to spot some clumps of red valerian too - awaiting my hummers! 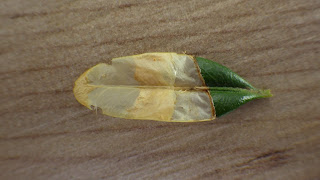 Above: I noticed that a few box leaves had been mined and an internet search showed extremely similar damage as done by the `boxworm moth` Cydalima perspectalis, a pyralid that Chris Manley had, new to the county, in 2018. If it is that species, I`ll keep a look-out for the caterpillars, as well as the adult, of this attractive pest (it can ruin box hedges).
Posted by Ian Morgan