The sultry night of Friday 28th June did indeed - as predicted - provide ideal conditions for moth trapping though, in my case, the interest was generated by locally wandering moths rather than any hoped-for migrants. In terms of migrants, my catch was very poor - a single rusty-dot pearl - but I am aware of a really good migrant being caught elsewhere in Carmarthenshire; details will be given when confirmed. [Now announced - see new posting above].

The word `deluge` in my title refers to the volume and variety of moths caught. My latest tally is 115+ species and there are at least a couple of micros that have not been identified, as well as others that never will be determined (various Coleophora or certain torts that I did not even pot up as I ran out of pots!). Furthermore, there would have been night-time visitors that I would not even have seen and I`ll give an example. The night was hot and I`d left the windows open and result was probably predictable when one trap was just feet away - into the house ventured some moths. I was awoken twice by trespassing moths, the first (a heart and dart) that landed on my face and, about 15 minutes later, another moth (a LYU, I think - I did n`t stop to check!) flew noisily around. By now (about 3.00 am), I was in `full sleepless mode`, so I arose to check the traps; there were moths galore around both the flat roof-top mains actinic and the garden MV. I made a mental note of what I saw before returning to bed.
Among the moths flying around and settling briefly was a beautiful snout. This individual was not anywhere to be seen the next day and it made me think about how many species we miss as some moths will only momentarily visit the lights before departing. In other words, you`d have to stay with the traps to record them. Also, I noticed that the outside of the trap and the adjacent, immediate areas of the traps were covered in moths at 3.00 am,  but by the time I arose very early the next morning (just after dawn), most of those moths had gone, either dispersing of their own accord or predated by bothersome robins and great tits. Additionally, elephant hawk-moths or more numerous large yellow underwings blustering around, both within and outside the moth traps, did n`t help, barging more interesting and smaller moths into flight.

Of the moths themselves, interest was provided by both `wanderers` and well as others from the immediate catchment. The `wanderers`, ie moths dispersing in the ideal warm conditions, would include the afore-mentioned beautiful snout, a bilberry-feeder (as a caterpillar). Now, I know my local area and the nearest bilberry is some 2 kms to the NW (in Cwm Mawr, a small population) or at Cwm Lliedi some 4 km away, where there are more substantial patches; there are also other bilberry areas much further afield at Troserch Woods, east of Llanelli.
The other wanderers presumably hailed from the coast, moths such as l-album wainscot, small elephant hawk-moth (lady`s bedstraw being its larval food-plant), or the plume Marasmarcha lunaedactyla, which feeds on rest-harrow. Again, using local knowledge, I can confidently say that the nearest rest-harrow populations are 2.5 km away at Cefn Padrig beach, just east of Burry Port or another at some 3 kms away at North Dock, Llanelli. Moth`ers have long known that hot summer nights will witness dispersing resident moths and it seems that this happened on Friday night. I also had other examples.
One of these examples was a broad-barred white, a species that I`ve probably only had some three or four times over the years, it feeds on various plants of ephemeral habitats such as dry brownfield sites. 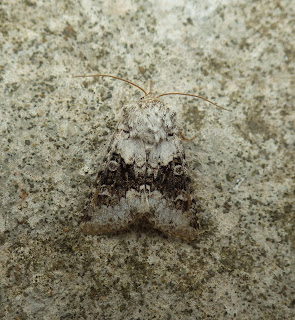 Above: broad-barred white. I deliberately put it against this pale background to demonstrate how its disruptive wing camouflage works. Click on pic to getting a better viewing. 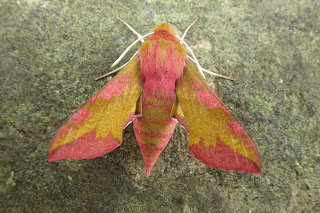 Above: adding some colour - a small elephant hawk-moth. 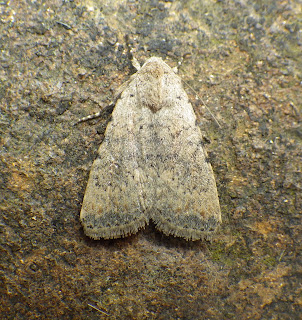 Above: this moth had me initially puzzled yesterday morning (fantasies of `was it a rare `desert job` etc!), but I later realised that it seems to be a rather attractively-hued pale mottled willow, with a good matching photo on p. 362 of the excellent `Moths of GB & Ireland` by Clancy et al. If I`m wrong and it`s something more interesting, I`ll be pleased!

Moths of more immediate provenance included clay triple lines, scarce silver lines, cypress carpet and more Dioryctia abietella and Lozotaeniodes formosanus. Another - possibly from a sweet chestnut growing literally next door - was the tortricid Pammene fasciana, a species that also feeds on oak; there are only a few Carmarthenshire records. 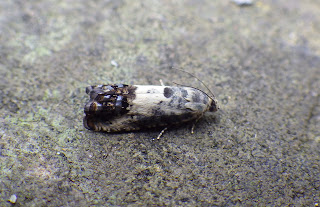 There are other moths that I could discuss, either resident or `dispersers`, but I`ll finish the moth listings by mentioning that, to give just one indication of the variety of moths that were present, and using the genus Eudonia of which I had five species - delunella, pallida, lacustrana, angustea and the more common mercurella. Remember that there is a really good guide by Jon Baker to these grey crambids in one of the early Carms Moth Group Newsletters (No 9, Aug. 2007). 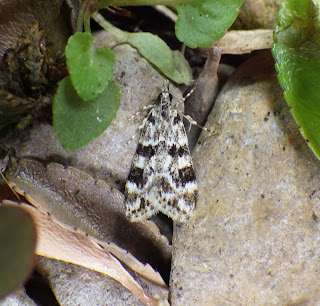 Friday night concluded five nights` consecutive trapping at my suburban wood-edge garden site, all on mostly warm nights with differing wind conditions (both direction and strength), but it showed that you can get different moths on different nights, with many noteworthy species not being recaptured. By the end of the period though, it was true that I was certainly ready for a rest and probably so too were the moths! I`ve now had a good night`s sleep on a non-moth night, and I shall have another go at some problem specimens; I may well post photos of them.
Posted by Ian Morgan