Earlier today (9/6) I had considered putting out the garden trap tonight, but with the forecast for clear skies and then only partly cloudy with a northerly wind, I`ve decided that it probably would n`t be worth the effort.

About a half-hour ago, when I was laying out the egg cartons within the traps, I noticed a longhorn (beetle rather than moth) on the wall.
It was Strangalia quadrifasciata (or that`s what it was called about thirty or so years ago when I was actively recording them); it`s fairly uncommon and local in Carmarthenshire and always nice to see. 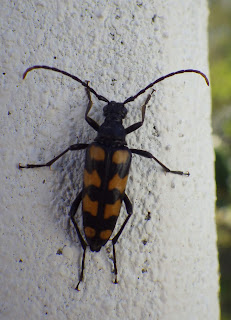 Hopefully, I`ll have some moths to report in my next blog!
Posted by Ian Morgan