Er Cof (am) is a very common formula found on Welsh graves, meaning the same as the English In Memory (of). Yesterday (5/6), in one of those `avoid the showers` sunny spells, I briefly visited a small overflow graveyard at Five Roads, Llanelli, after an unsuccessful search of some nearby pastures for marsh fritillaries. I had another short session searching for marsh frits this afternoon but, again, I was not lucky in terms of finding any. I`ll blog tomorrow to update that search.

The interest in the tiny cemetery at Five Roads - an outlier of Rehoboth Chapel, along the road to Mynydd Penbre - is provided by the surviving and as yet unused section of the small enclosure for burial purposes. `Surviving` is perhaps an odd word to use in the context of a graveyard but here, almost as an island of biodiversity, is a superb remnant of the semi-natural vegetation that was once our countryside.
Five Roads is literally that - the junction of five routeways that once coalesced within the lost commonland of Mynydd Croeslaw - you won`t find that name on any OS map, but it can be clearly seen on the Stradey Estate maps dating from the very start of the 19th Century. The more observant of you may have noticed that there is often a junction of several minor roads on surviving commonland - I can think of at least one on Mynydd Du, another at Rhos Pwll y Gawnen near Trelech in NW Carmarthenshire and another on the once extensive, but now enclosed, common of Mynydd Mawr at Gorslas. Place-names in the latter area reflect the presence of that common: Maesyryfa, (the field - maes - where the livestock were assembled to be driven (the verb `yrru`), plus the word for place `fa`); or another name Lotwen (Caeau Lotwen) - the `white lot` (ie land division), formed after the common was parceled out for sale - the `wen` (= white) probably refers to the white umbels of whorled caraway Carum verticillatum or even possibly cotton-grass heads.
I digress geographically, but back at the Five Roads area, I recall as a teenager, pastures with curlews, enclosures with marsh and small pearl-bordered frits, hornet robberflies and yellowhammers galore, but they are virtually now all gone. I`ve angrily seen wet flushed fields drained in my lifetime, losing their sundews and bog asphodels, marsh frits and keeled skimmers. Before my time there would have been a vastly greater proportion of unimproved pastures, but most is now rye-grass and even more rye-grass - perhaps the cleverest of the invasive plant species, in that it gets humans to actually plant it!
In the small cemetery of Five Roads I reflected that that perhaps the `Er Cof` might be an equally suitable introductory verbal lamentation of loss for our destroyed local pastures. There must have been `marsh frits galore` a few decades ago. 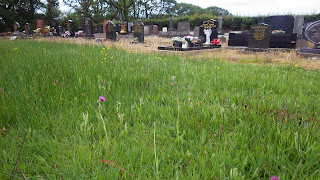 Above and below: have a look (click on pic to enlarge) at the vegetational quality of this grassland - meadow thistle galore, whorled caraway, sedges etc. Plenty of Glyphipterix thrasonella and Bactra lancealana flitting around, but too skittish to photo. 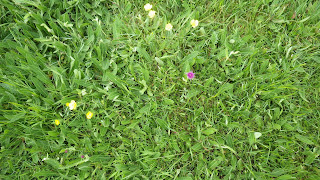