Yesterday (20/6), I spent a couple of hours on the northern slopes of Mynydd Sylen and, later, at Mynydd Llangyndeyrn each being - respectively - on the southern and northern edges of the Gwendraeth Fawr valley.
I re-visited a marvellous bog on Mynydd Sylen`s northern flanks and made various `bread-and-butter` useful records, including the crambid `grass-moth` Catopria margaritella. This was not unexpected on such a bogland site; Crambus lathionellus was also present. There were spinnings on the terminal shoots of bog myrtle but I`m at a loss as to what they are. 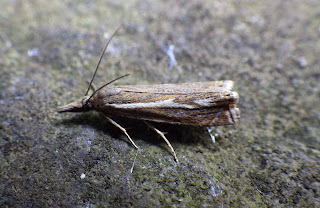 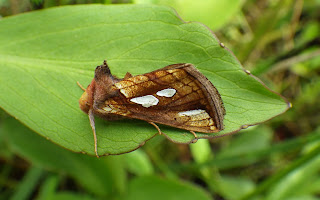 Above: this gold-spot was spotted resting on a bog bean leaf. I wonder what is the function of those swellings at the edge of the leaf...any ideas?

Above: I`ve no idea regarding the identity of this, found in a spinning at the tip of bog myrtle. 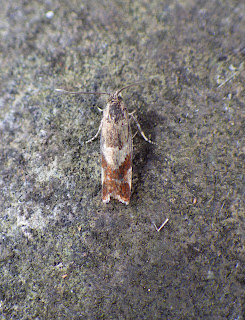 Above: spotted in the adjacent hedgerow, Epinotia cruciana. Note the `cross` on its `back`, explaining why it is called cruciana.

A short drive took me to Mynydd Llangyndeyrn, a site that I`ve been visiting for some 45 years and, on this occasion, I approached this ridge-top common from its eastern end, whereas normally I visit by way of its western termination near Crwbin. I particularly wanted to visit the `northern-central` section of the common as here the underlying rock is carboniferous limestone, rather than the acidic quartzites and conglomerates around it. One reason for the visit was to check to see if the forester moths were out and I was in luck, spotting a singleton almost immediately and it was well behaved enough for me to take a series of photographs. 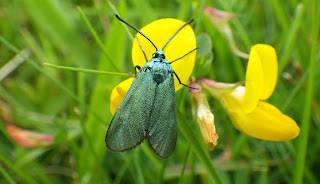 Above: the view to the NE from Mynydd Llangyndeyrn. The ridge in the middle distance is the southern rim of the Tywi Valley near Gelli Aur, with the NE Carms hills and Bannau Sir Gar in the far distance. You`ll have to left-click on the pic to enlarge.

Walking through an ashwood back to the car, I noticed something fluttering in the undergrowth. It looked like a red-necked footman without the red neck, which made me consider that it might be something else such as Prays fraxinella (a dark form exists) but it was too large for that and the termen (`tail end`)  shape seemed wrong. I sent a photo to George and he thinks that it is indeed an unusual colour form of red-necked footman. Photo below:

Some clumps of ox-eye daisy were inspected for mines of Bucculatrix nigricomella and indeed some mines were found. Unfortunately - to my eyes - they seem to be due to the fly Phytomyza leucanthemi. I`d like to be wrong... 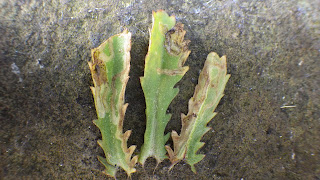