Back to moths (mostly)

I have not trapped for what seems to be ages with the unsuitable night conditions discouraging me. Yesterday (10/6), I did at least manage to to do a two-hour slot of daytime mothing, visiting the Ashpits Pond area (just east of Burry Port) and a short visit to Stradey Woods where I followed a path through a very young plantation above Cwmbach hamlet. A few records of mostly common adult moths and leaf-mines were made at both sites.

At Ashpits Pond, a stand of spindle is, without fail, annually feasted upon by colonial caterpillars of  spindle ermine Yponomeuta cagnalla. 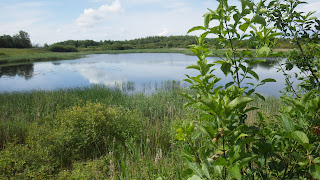 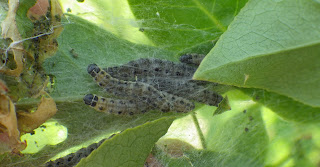 Above: one of the spindle bushes and some of the caterpillars.

The micro-moth genus Mompha is associated with various willowherbs, each exploiting different species or different parts of the plants. Yesterday, I noticed some mines of Mompha raschkiella in leaves of rosebay willowherb (photo below). Left-click on pic to enlarge. 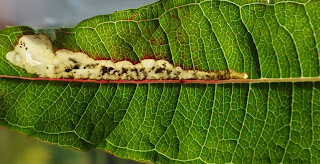 Later, at Stradey Woods, a mine in a birch leaf intrigued me, with its reddish hue alerting me to the possibility of Eriocrania sparmanella (one that I have n`t had yet). I`m not sure about the identification of this mine, as it was at an early stage, but it suggested some of the characteristics of sparmanella - a linear mine near the centre of the leaf becoming a blotch, long coils of frass etc. Furthermore, it is getting late for many of the springtime Eriocrania mines on birch (ie they have `gone over` and are vacated), whilst E. salopiella has already been around for a good month or so. Photos below: 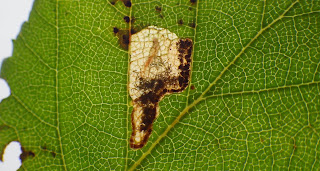 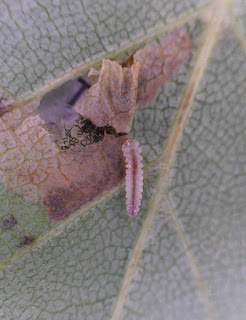 Postscript re Eriocrania above: I`ve just noticed the photos on p 74 in Ben Smart`s `Micro-moth Field Tips`...compare my top photo with the sparmanella one in the book.
Second Postscript: I now think that it`s E. salopiella - look at the pic immediately above - you can clearly see the lateral projections on the side of the head.

Finally - and accounting for the `mostly` in the title - a non-moth record of interest. We are all familiar with that harbinger of spring, the bee-fly Bombylius major, a species that can be seen in woodland, some gardens or other flower-rich sites from mid-March to early May. Less well-known is its more rural cousin Bombylius canescens, typically found in more open situations than major.
It is later in flight, smaller and lacks the black wing markings of its congener. Whilst on my moth search yesterday, one conveniently alighted on a grass stem in front of me but, less convenient was the automatic focusing  set-up on my camera, resulting in an inability to focus on the bee-fly. Fortunately, the well-behaved insect allowed me to place my hand behind it, giving what would have been a good photo, except for `yours truly`s` digits in the background! 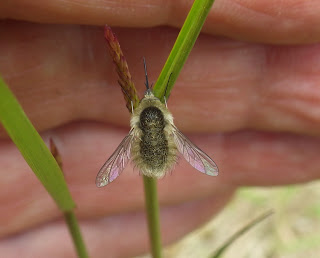 Above: Bombylius canescens - keep a look-out for it. I used to see it on flower-rich rhos pastures (and other habitats), when I was more widely botanising in Carmarthenshire a couple of decades ago.
Waiting for some decent trapping weather...
Posted by Ian Morgan