More rain than I`d expected greeted me this morning and, as always, it slowed my checking of the trap contents which were quite a different mix of moths from the night before last but, once more, reasonably varied. This time there were no leopards but there was a scarlet tiger - normally a day-flyer - and there was some repetition and overlap, but the cypress carpet was a different individual to the one caught on Saturday night.
I still have specimens in the fridge to check (and, if need be, photograph) but they seem to be nothing particularly noteworthy, just requiring i/d confirmation.
A couple of lime hawk-moths and the scarlet tiger provided some colour to last night`s traps but the sole migratory representative was a rusty-dot pearl. As at Pwll, I suspect that my lime hawk-moths are utilising elms, though the big stands growing within sight of my garden are not the upright English elms as at the Pwll hedgerows, nor are they wych elms, rather they are one of the hybrids or varieties that have puzzled botanists along the south Wales coastline. Llansteffan, incidentally, is a hot-spot for those taxonomically-awkward elms...but the moth caterpillars don`t seem to mind - it`s just food to them! There are also (planted hybrid) lime trees in my adjacent local woodland, but they are quite a distance away. 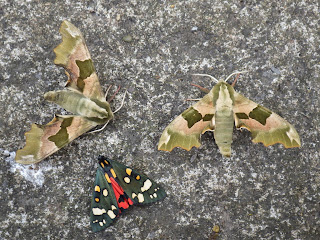 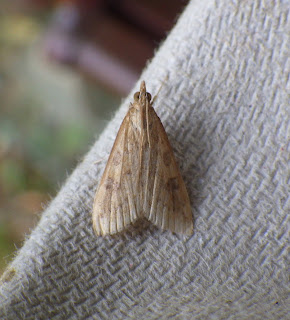 Above: the rusty-dot pearl - will there be more migrants later this week? Warm winds could bring something interesting to our traps.
Posted by Ian Morgan