A break in the clouds...

This wet June is starting to remind me of the very wet summer of 2012, whereas most of us would prefer the hot summer (and excellent migrant year) of 2006. Yesterday (14/6), when there was a sunny interlude to the grey skies, I made a visit to two sites in extreme south-east Carmarthenshire, both in the Bynea/Loughor Bridge area. The first (planned) visit was to an area of brownfield/saltmarsh and the second (unplanned) site was at the nearby Morfa Berwig LNR, on my way back home.
The brownfield site was inspected when the dark clouds had returned, the wind had picked up and when I was expecting rain at any moment but, apart from a few spots, it did n`t transpire. Consequently, hardly any lepidoptera were on the wing - indeed, the botanical interest won the moths on this occasion with two bushes of sweet briar Rosa rubiginosa (smelling of apples) and a strong colony of ploughman`s spikenard Inula conyza, the latter a plant not without its own good `moth potential`. 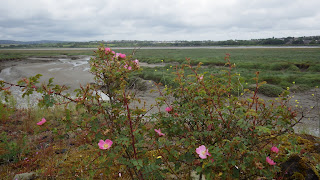 Above: a brief deviation into botany - sweet briar with Glamorgan across the estuary. 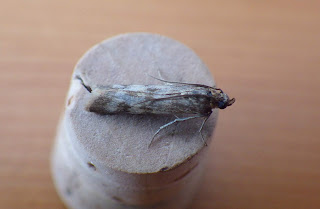 A single Homoeosoma sinuella - a pyralid of dry habitats that feeds on plantains - was flushed and caught; it`s a moth that I associate with our coastal sandy grasslands and evidently the well-drained slag soils at Bynea are to its liking. A Nemophora degeerella, looking quite tropical with its colourful wings, was spotted resting on a pathside leaf. 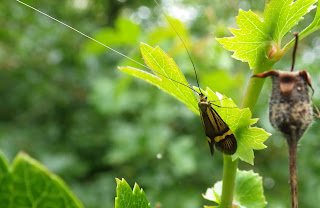 Morfa Berwig, easily visited along the main coast road, was called at almost on a whim, and I was glad that I did so, as several records of interest were made. Ox-eye daisies had what seems to be Dichrorampha alpinana resting and flitting around in the now-emerged sunshine; there is the extremely similar D. petiverella which feeds on tansy, sneezewort and yarrow which is also a possibility (though tansy is absent from this site), so alpinana cannot be an absolutely definite record. 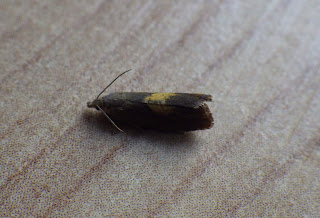 Various other common day-flying moths were recorded and Glyphipterix forsterella was later seen in some quantity around patches of Carex remota alongside a broad drainage ditch within willow carr. Carex remota may well have been the host plant of my woodland forsterella seen very recently at Stradey Woods.
Leaf-miners provided other records of interest with Epermenia chaerophyllella, found on hogweed and Oidaematophorus lithodactyla on fleabane. 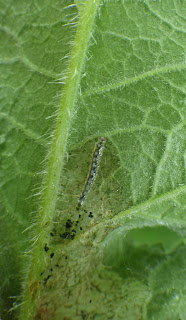 Above: caterpillar and feeding damage of Epermenia chaerophyllea under a hogweed leaf. Other plants nearby had more substantial damage (abundant holes etc) of black sawfly larvae, so be aware of that possibility too. 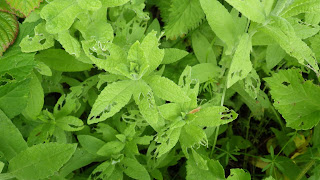 Above: the characteristic damage done by the plume moth Oidaematophorus lithodactyla on fleabane. 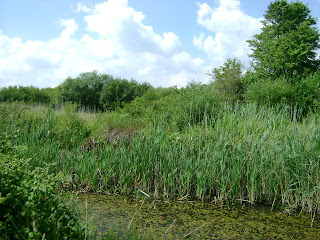 Above: as a final photo, a shot of one of the larger pills or drainage ditches at Morfa Berwig; wet carr, flower-rich brownfield and scrub are other habitats found at this LNR.