On Thursday afternoon (23/5), I paid a visit to Mynydd Mawr Woodland Park, Tumble which, in spite of its name, has extensive open areas including moderately rich neutral grassland, a type that has all but disappeared in the intensively farmed countryside. This ungrazed grassland is simply restored soil, spread over shaley deposits at a former colliery site, and although man-made it is an important conservation resource in an increasingly impoverished agricultural landscape. It is suffering from some scrub invasion (though it is periodically cut back), lacks scarification or grazing to break up the sward and is, perhaps, underappreciated as a habitat. It is certainly of interest for lepidoptera as, on my visit, I counted some 35+ burnet companions, a small yellow underwing and very many common blues and dingy skippers. 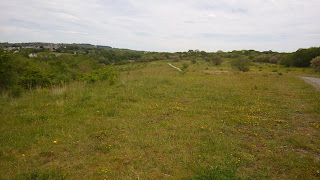 Above: a view to the NE at MMWP.
A sunny bank near the northern (Cefneithin) entrance had Coleophora paripennella cases on knapweed leaves and where what is believed to be Epiblema cirsiana were resting on clumps of the same plant. The hind wings were briefly examined after the live individual had been cooled down in the fridge, and they were dark rather than light in colouration. 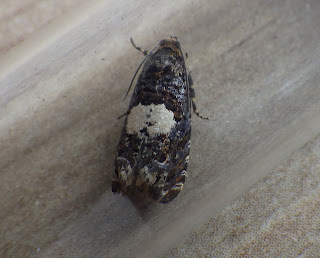 Above: believed to be E. cirsiana.
Later, a short visit was made to the more wooded former Cynheidre Colliery site, where again on knapweed some more E.cirsiana were found; a Cochylimorpha straminea was also seen and, again, burnet companions, dingy skippers and common blues were present. In some damp willow scrub, male Adela reaumurella were in `dancing flight`.
As is to be expected, Micropterix were frequent on buttercups and both calthella and aruncella were seen. The female below is thought to be aruncella rather than the similar female of calthella. I should have potted up a distinctive male aruncella to photograph instead! 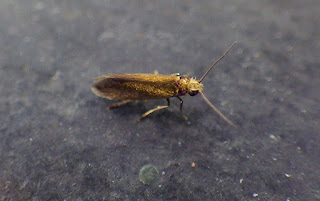 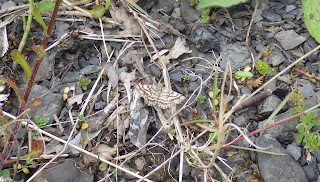 Above: latticed heath...can you spot it? You`ll have to left click on the pic to get a better view. 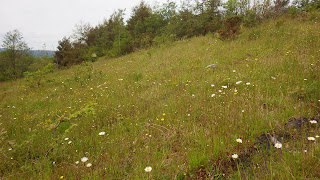 Above: one of the sunny, flower-rich slopes at Cynheidre. 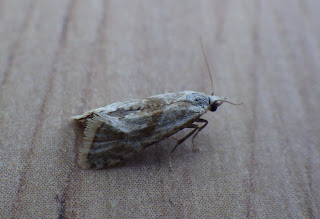