I spent part of this afternoon (18/5) on the coastal levels SE of Llanelli, visiting two sites but with a third intended locality abandoned due to the threat of rain (which materialised very shortly afterwards).
The first site involved a repeat visit to the Morfa de-tinning works, a brownfield site with a diverse flora and where I knew that marjoram grew in quantity. I was after a particular Coleophora sp. that depends on that plant, but none were seen. However, clumps of carline thistle that had retained their seed `fluff` caught my eye, and I recalled Barry Stewart telling me - many years ago! -  to check such plants as moth larvae eating the interior of the seed heads cause the retention of the wind-dispersive parts above.
Upon opening these heads, I could see that all (of those opened) held the `target` larvae - that of Metzneria aestivella, a species that has been frequently found by such searching techniques in neighbouring Glamorgan (look at the very useful maps on their new website and also the book The Moths of Glamorgan). It is not included on Sam`s 2016 listing of Carmarthenshire moths (unless I have overlooked it). 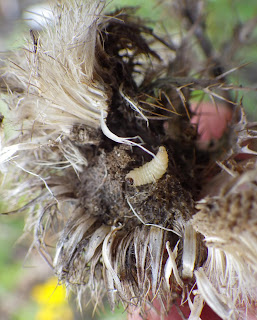 Above: Metzneria aestivella caterpillar in an open flower head of carline thistle.

I then headed eastwards for a short distance to the Morfa Berwig LNR, just inland from the WWT Penclacwydd wetland centre. 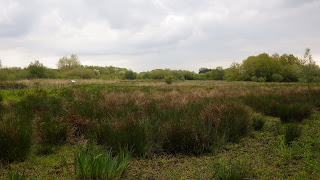 Above: a view of part of Morfa Berwig LNR, Bynea, Llanelli. Out of sight are some broad drainage `pills` (ditches).

Alongside the main access track near to the above photo, I located Epinotia sordidana caterpillars (another of my targets) in folds of alder leaves. Such fieldwork has apparently yielded records of this moth elsewhere and the distinctive combination of the caterpillar and its leaf-fold `nest` is much easier than the required dissection for i/d of the adult moths. See Ben Sale`s Micro-moth Field Tips p.89. 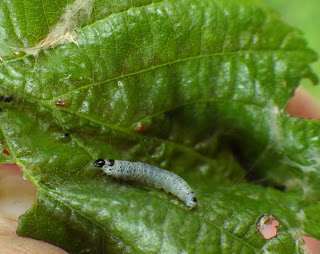 Above: the blue-grey Epinotia sordidana caterpillar in opened-up fold of an alder leaf.

A lucky find - another that came to me rather than me searching for it, was a hairy dragonfly Brachytron pratense (a fenland species long known from the coastal flats of Llanelli) that landed on my leg! 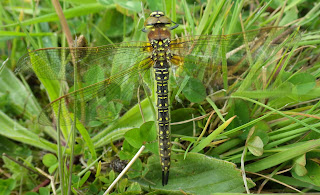 Above: a female Brachytron pratense - note the hairy edge to the thorax and abdomen (left click on pic).

Inspection of hedgerow elms hereabouts yielded some unusual leaf-mines that were new to me and which  raised my hopes - but they proved to be non-lepidopteran: 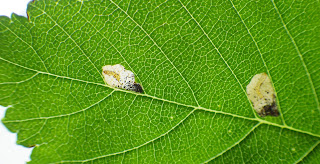 Above: mines and larvae of the weevil Orchestes alni. 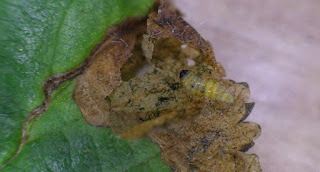 Above: an opened mine showing the yellowish larva of the sawfly Fenusa ulmi.

What was present though, were more larval cases of Coleophora follicularis on some plants of hemp agrimony, growing in the lane on the S. side of the LNR.

Typha (`bulrush`) heads held frequent larvae of Limnaecia phragmitella, their presence suggested by retained `fluff` (seed heads) on the bulrush spikes. You may have to `left-click` on this photo below to get a better viewing. I`ve found this species by the same technique elsewhere locally this spring. Open up the seed heads to locate the caterpillars. 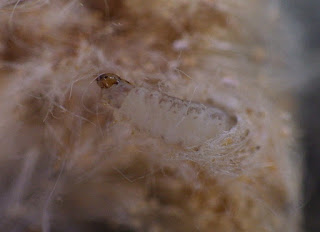 Readers will remember the longhorn beetle that was found settled on the wall by my front door only a couple of days ago. Today a different species of longhorn, the `wasp beetle` Clytus arietus did the same but, this time, by my back door! Photo below: 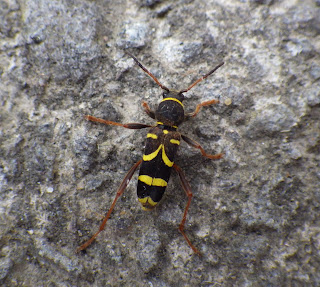