The right place was in my potting shed yesterday morning.  I was working there when I saw a small moth on the window, looking a bit sorry for itself - it was pouring with rain! 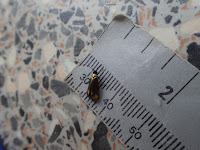 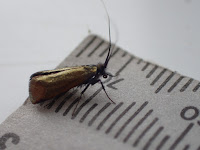 It looks much the same as the moths in Steve's and Ian's recent posts, so I'm assuming that it's Adela reamurella.  Like Steve, it's a first sighting for me.

I too have seen a few Micropterix calthella here on Marsh Marigolds and Buttercups, haven't seen M.aruncella yet but that species usually appears later in the month.  Hopefully the more striking M.aureatella will appear as well, as it did last year.
Posted by Chris Handoll