I spent part of today (7/5) mostly leaf-mining, though with no luck regarding evidence of particular species on various deliberately targeted plants. In the course of that activity, a few adult moths were noted and I also have a pile of (probable common) miscellaneous leaf-mines to go through when it rains tomorrow.

Very recently, Steve posted a nice photo of Adela reaumurella from Cwmllwyd, mentioning that it was the first he has seen in spite of its status being given as `common`. I too don`t see it very often and it is seemingly perhaps a bit `thin-on-the-ground` in our county, though I also suspect that there is an element of being `at the right place at the right time` about spotting it. Adela reaumurella is one of the day-flying longhorns, the name deriving from their impossibly long antennae. The males can occur in swarms and today I had reaumurella at two sites on the limestone ridge - a group of about a dozen and, later, a singleton. The scarcer Adela cuprella occurs in Pembrey Forest, where it feeds at flowers of low-growing creeping willow...something for Adam to keep an eye out for.
They were very lively and this, coupled with the gusting wind, made photography difficult. 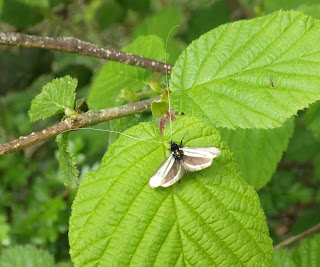 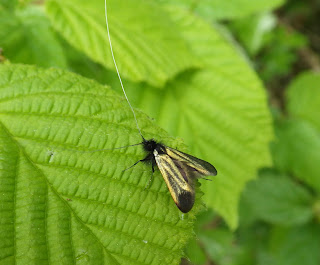 Below: squadron ready for take-off! 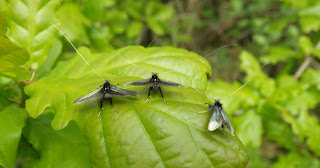