I may delete this posting after a few days as this is obviously a moth blog but, about 10 minutes ago, I spotted a beetle on the wall immediately next to my front door. A quick glance told me that it was not a species that I was familiar with, though I knew that it was a longhorn.
It was easy to identify - a small poplar borer Saperda populnea, which has been recorded in Glamorgan by Mark Pavett and others, and with an outlying record from Coedmore in the Teifi Valley area of south Ceredigion. There are no Carmarthenshire records.
This beetle is normally found in aspen (which is a poplar) and sometimes other species of poplar.

I like it when good records come to you, rather than you searching for them! Other `goodies` have come to my previous front doors such as striped hawk-moth, western conifer seed bug and various scarce or rare micro-moths. 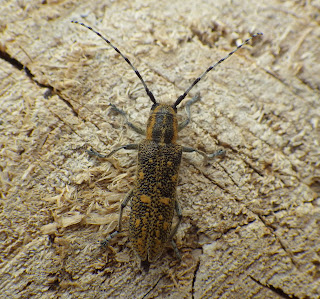