More on leaf-mines and Coleophora

I`ve now had time - thanks to the rain -  to look at my specimens that were collected yesterday (7/5) at two sites along the Carb Lst/quartzite ridge (Carmel Woods, E) and SW of Carmel and a third locality on the Coal Measures at Mynydd Mawr Woodland Park (MMWP, Tumble).
For Eriocrania on birch, E. unimaculella was found SW of Carmel (it was also found, but only today identified, the previous day at Morfa, Llanelli). E. sangii was found at SW of Carmel and also at MMWP, Tumble.
Coleophora gryphipennella was found on Rosa sp. at the SW of Carmel site (the high quartzite ridge at SN 51-98 etc). 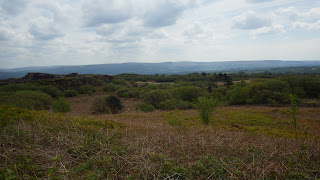 Above: a view of part of the `SW of Carmel` site. 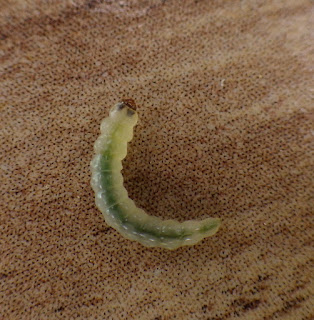 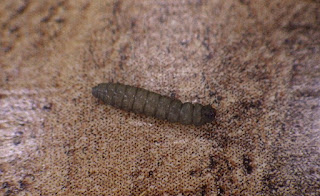 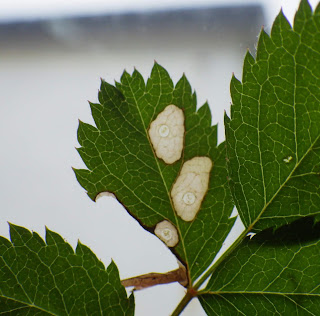 Above: feeding damage by Coleophora gryphipennella. Note the `puncture points` made in the centre of the eaten areas. This is typical of Coleophora and can help differentiate from damage marks made by other insects. The actual serrated-edged larval case has gone `AWOL` - it was kept in a container with other (Eriocrania birch) leaves collected on that day and later accidentally thrown out. I must learn to keep them in separate containers! 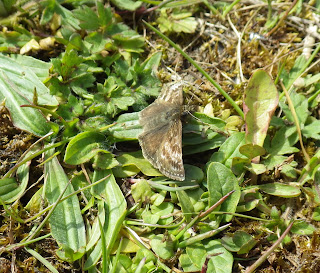 Above: Dingy skippers were seen at three sub-sites at MMWP, Tumble (including one group of four) and a singleton was also noted on the ridge SW of Carmel.