I `d gone out this morning (28/5) to see if I could find any marsh fritillaries at a couple of rhos pasture sites in the Mynydd Sylen area north of Llanelli. Unfortunately, the weather unexpectedly turned poor - a strong wind, grey skies and even some drizzle; by the time I had to go home for a parcel delivery, the sun was coming out!
Anyway, I spotted a few clumps of greater stitchwort and, knowing that a couple of micro-moths were associated with this plant, went to have a look. I flushed a grass-moth and thought to myself, `you were slow there, you could have made a swipe at that` but, before I had finished that thought- if you know what I mean - spotted something else and was glad that I had n`t `made a swipe` as I may have scared a rather large moth away. My eyes nearly popped out as I reached for my camera.
I took the first photo just as a `record image` in case it flew away and then, literally twenty ever-closer photos later, took the last image. You`ll have to left-click on the first photo to spot the moth.
I`ve only seen this now-rare species once before, at Tywyn Burrows (`RAF Pembrey Sands`) in the early 2000s; I`m sure that you`ll be able to i/d this absolute cracker. 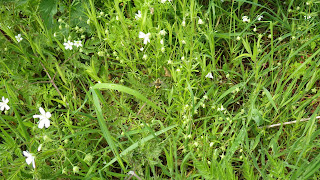 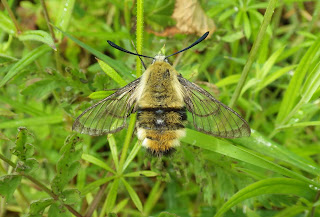 The other moths were more mundane  - Bactra lancealana, Glyphipterix thrasonella (no haworthana spotted) and a common heath. The latter is shown below - it was a very restless individual that would not stop for a good photograph. 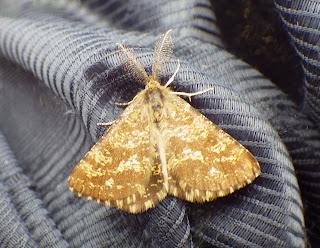 The bog also has nearby pastures that hold quite restricted amounts of devil`s-bit scabious, the food plant of the hawk-moth shown above, as well as the marsh fritillary (the original object of my visit). I did not see any marsh frits (the cold, overcast weather meant that absolutely nothing was on the wing), but I suspect that they may be present in small quantity. The fields on the opposite side of the lane to the bog also are unimproved, but rather overgrazed in ideal marsh frit terms. They are in the same ownership as the bog site. 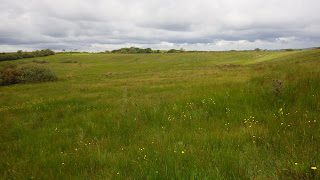 Above: Sam knows this bog, having done a (productive) vegetation survey a few years back.

At another site on Mynydd Sylen this Epinotia subocellana was found resting on a leaf: 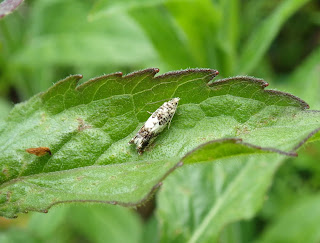