I did consider giving the title `in the bleak midwinter` to this posting, as it felt like that this afternoon (6/5) when I visited two brownfield sites on the southern margin of Llanelli. The two sites - Morfa and Machynys - have proved profitable for moths in the past, with a range of vegetation that puts much of Carmarthenshire boring, almost monocultural farmed landscape to shame.
The first site, an old de-tinning works has `contaminated` soil, which has discouraged development or other use; it is now scrub with open floriferous areas and it is overlooked by a tall, brick chimney marked `1919`, the last of many that adorned the Llanelli industrial skyline of my youth. It is adjacent to, and obviously visible from, the main coastal road (B4304).
The second, nearby, site was at Machynys, between the same coast road and new sea-edge housing. 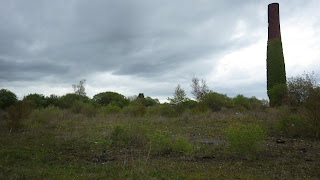 Above: on a grey May afternoon, the wind-blown Morfa de-tinning works site.

As mentioned, the afternoon was cold, with a sharp northerly wind and the only adult moths seen were Cydia ulicitana, a species that is virtually ubiquitous on gorse at this time of year. However, I did not expect to see adult moths and the main initial purpose of my visit was to search for Eriocrania leaf-mines on birches at the first locality; a few were found and they will be looked at later, as will a small amount of other leaf-mines.
In addition to Eriocrania, I`ve been `swotting up` on Coleophora lately and a search was also made for this genus. The common Coleophora serratella was the first to be spotted and several were seen on birches at the Morfa site, but I was later most pleased to find what I first thought may be Coleophora betulella on another birch at the same locality. However, I`m now not at all confident that it is that...and I think that it is another species, but which one I`m unsure. Any thoughts?
Moving on to Machynys, I immediately spotted Centuarea nigra (knapweed) showing signs of Coleophora feeding, with many `holed` leaves, but it took me some time to find a larval case, rather than feeding damage. 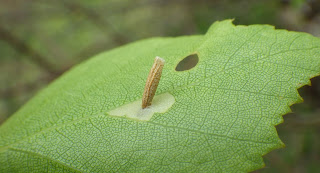 Above: Coleophora serratella, a frequent species that I`ve also had on alder leaves. 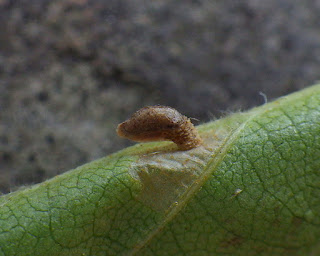 Above: Coleophora  sp. (on birch)

Above: Coleophora paripennella on knapweed