Yesterday afternoon (13/5), I visited (amongst other places), Coed Gwempa, a Woodland Trust property and SSSI near Llandyfaelog in the Gwendraeth Fach valley. The wood lies next to the river in an intensively farmed landscape on the slightly base-rich Old Red Sandstone and it includes a central clearing of rank, ungrazed pasture (it could do with some grazing!). In and around that clearing, knapweed Centaurea nigra is common and, as the area is ungrazed, large plants are present.

It was on knapweed that I caught a small tortricid that I believe may be Endothenia oblongana.
There is a single 2005 record cited on Sam`s county list, but from where and by whom I do not know.
Incidentally, it was at Coed Gwempa that I caught a red-tipped clearwing in the early 1990s, in a wet clearing near the river. 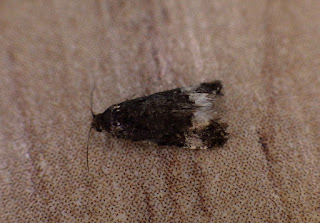 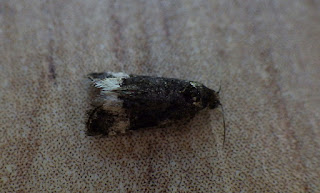 I`ve found my old photo of the red-tipped clearwing (see below). I spotted it whilst recording hoverflies and it is actually dated 12.6.1990. 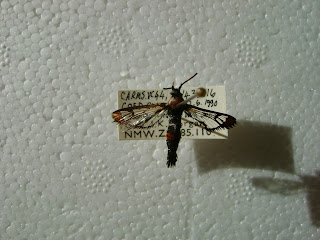