Another tort on knapweed 14/5.

I`d taken a load of rubbish to the dump and had other work to do, but decided to have a half-hour break (though it turned out to be an hour!) at a site on the way home at the outskirts of Llanelli. I collected some leaf mines on birch (to be looked at later), but then remembered a grassy bank with much knapweed and betony.
I soon spotted a tortricid resting within a clump of knapweed but, in the process, I slightly disturbed this individual and it flew upwards to rest on a dead knapweed stem - actually to a position where it was easier to catch. A careful `sweep` caught the moth and, after a few `scares` when I thought it had escaped as I tried to pot it up, it was noticed resting quite placidly on the inner side of my net and was duly put into a container.
At home, after a spell in the fridge, I was able to have a good look at it and I believe that it is Epiblema cirsiana rather than the the very similar E. scutulana, both on looks and the circumstantial evidence that it was on knapweed rather than thistles, the food-plant of scutulana which were absent at the site where it was caught. (Note though, that the specific name cirsiana suggests thistles!). 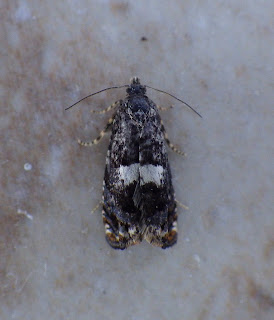