A quick walk and another Eriocrania

Today (11/5), I took an hour`s short walk in Stradey Woods, Llanelli, again mostly `mining`. Eriocrania salopiella was new for me though there are a few Carms records, presumably Sam`s, and Eriocrania unimaculella was also noted. A mine on beech proved to be of the weevil Orchestes fagi, whilst dipterous mines were found on snowberry (Aulagromyza hendeliana) and on Luzula sylvatica (Cerodontha luzulae - a spectacular fly mine, pale yellow with purple staining); for the latter plant I was actually looking for the micro-moth Elachista regificella, but again failed. Its sole county record therefore remains one made in inland Carmarthenshire by Sam over a decade ago.
I saw Adela reaumurella at two sub-sites (above Cwmbach hamlet and in Cwm Mawr); I also saw it yesterday east of Llanelli, making quite a spate of records for this engaging moth. Today I had dancing swarms of the male moth whereas yesterday, I recorded the solitary females.
Beat any gorse bush at present and you are surely likely to flush lots of Cydia ulicetana - I disturbed many scores today along a path in an open and sunny woodland clearing.
I checked a stand of larch for Coleophora laricella but failed to find any. This was irritating as a few days ago I also examined some at Mynydd Mawr Woodland Park, Tumble, but could not find any larval cases. However, at that latter site, quite a few of the larch needles were white - which is a potential sign of occupancy by this moth (though I did n`t know it at the time), so it is an unconfirmed record. 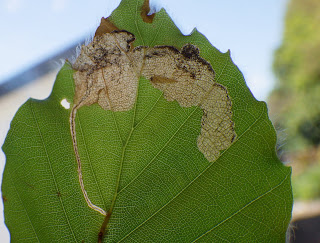 Above: beware - not a moth but a beetle mine Orchestis fagi on beech. 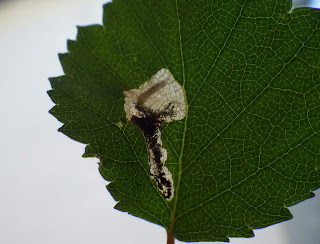 Above: Eriocrania salopiella on birch.The mine starts near the centre of the leaf, follows a linear track which then expands into a blotch. 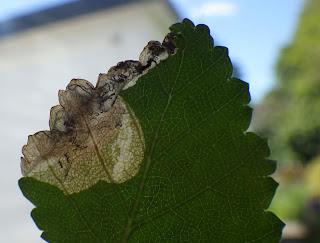 Above and below: the blotch and a larva of Eriocrania unimaculella - note the two dark spots on the head of the larva. 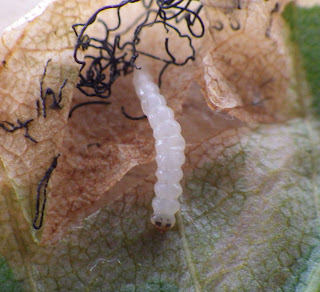